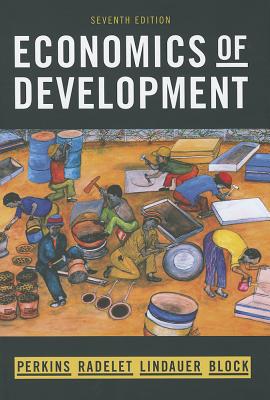 A dynamic revision of the most modern development economics textbook.

This classic text has been aggressively revised to incorporate the latest research defining the Development Economics field today.

Dwight H. Perkins is the H. H. Burbank Professor of Political Economy Emeritus at Harvard University and former director of the Harvard Institute for International Development. Professor Perkins is a leading scholar on the economies of East and Southeast Asia. Professor Perkins’s legacy is contained not only in the many chapters he has contributed to Economics of Development and in his many scholarly books and articles, but also in the thousands of students he has taught over his distinguished academic career (including all of his current coauthors!).

Steven Radelet joined Economics of Development for its fifth edition. At the time he was a fellow at Harvard’s Institute for International Development and taught in both Harvard’s economics department and the Kennedy School of Government. He subsequently was deputy assistant secretary of the U.S. Treasury for Africa, the Middle East, and South Asia; a Senior Fellow at the Center for Global Development; and Senior Advisor on Development for Secretary of State Hillary Clinton. He is an expert on foreign aid, developing country debt and financial crises, and economic growth, and he has extensive experience in West Africa and Southeast Asia. He currently serves as Chief Economist for the U.S. Agency for International Development (USAID).

David L. Lindauer is the Stanford Calderwood Professor of Economics at Wellesley College, where he has taught since 1981. He has frequently served as a consultant to the World Bank and was a faculty associate of the Harvard Institute for International Development. Professor Lindauer’s area of expertise is in labor economics. His research and policy advising has included work on industrial relations, labor costs and export potential, minimum wages, poverty and unemployment, public sector pay and employment, and racial affirmative action. He has worked on labor market issues in East and Southeast Asia, Sub-Saharan Africa, and elsewhere. Professor Lindauer, an award-winning teacher of economics, brings his considerable experience teaching undergraduates to this edition.

Steven A. Block is Professor of International Economics and head of the International Development Program at the Fletcher School of Law and Diplomacy, Tufts University. He joins Economics of Development beginning with the seventh edition and has been teaching development economics at the Fletcher School since 1995. Professor Block also holds a faculty appointment at the Friedman School of Nutrition Science and Policy at Tufts University, and has been a visiting scholar at the Harvard University Center for International Development and at Harvard’s Weatherhead Center for International Affairs. He has published numerous scholarly articles in the areas of agricultural development and political economy, and worked extensively on policy advisory teams across Sub-Saharan Africa and in Southeast Asia.