Off the Grid (A Joe Pickett Novel #16) (Paperback) 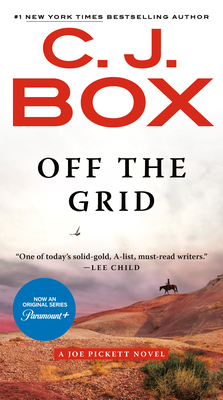 Off the Grid (A Joe Pickett Novel #16) (Paperback)

This is book number 16 in the A Joe Pickett Novel series.

The Red Desert of Wyoming is a beautiful and punishing place for anybody, even for game warden Joe Pickett and his friend Nate Romanowski in this #1 New York Times bestselling thriller...

Nate is off the grid, recuperating from wounds and trying to deal with past crimes, when he is suddenly surrounded by a small team of elite professional special operators. They’re not there to threaten him, but to make a deal. They need help destroying a domestic terror cell in Wyoming’s Red Desert, and in return they’ll make Nate’s criminal record disappear.

But they are not what they seem, as Nate’s friend Joe Pickett discovers. They have a much different plan in mind, and it just might be something that takes them all down—including Nate and Joe.
C. J. Box is the #1 New York Times bestselling author of the Joe Pickett series, five stand-alone novels, and the story collection Shots Fired. He has won the Edgar, Anthony, Macavity, Gumshoe, and two Barry awards, as well as the French Prix Calibre .38 and a French Elle magazine literary award. His books have been translated into twenty-seven languages. He and his wife Laurie split their time between their home and ranch in Wyoming.
Praise for Off the Grid

“With this exceptional entry, Box solidifies his place at the upper end of the crime fiction pantheon.”—Publishers Weekly (starred, boxed review)

“Filled with high suspense, formidable characters, and an action-packed ending more vivid than most movies. Off the Grid never falters as Box again delivers an exceptional thriller.”—South Florida Sun-Sentinel

“You can’t help turning the pages and holding your breath until you find out where this scary, all-too-plausible caravan is heading.”—Kirkus Reviews

“A terrorist thriller with a uniquely western flair...This is a breakneck story that Pickett fans will want to read in one sitting.”—Booklist