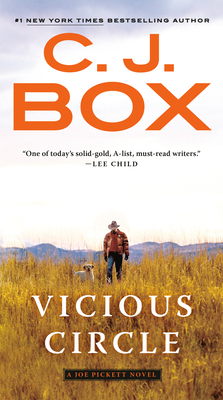 This is book number 17 in the A Joe Pickett Novel series.

The past comes back to haunt game warden Joe Pickett and his family with devastating effect in this thrilling novel from #1 New York Times–bestselling author C. J. Box.

The plane circled in the dark. Joe Pickett could just make out down below a figure in the snow and timber, and then three other figures closing in. There was nothing he could do about it. And Joe knew that he might be their next target.

The Cates family had always been a bad lot. Game warden Joe Pickett had been able to strike a fierce blow against them when the life of his daughter April had been endangered, but he’d always wondered if there’d be a day of reckoning. He’s not wondering any longer. Joe knows they’re coming after him and his family now. He has his friend Nate by his side, but will that be enough this time? All he can do is prepare...and wait for them to make the first move.
C.J. Box is the #1 New York Times bestselling author of seventeen Joe Pickett novels, most recently Off the Grid; five stand-alone novels, most recently Badlands; and the story collection Shots Fired. He was won the Edgar, Anthony, Macavity, Gumshoe, and two Barry awards, as well as the French Prix Calibre .38 and a French Elle magazine literary award. His books have been translated into twenty-seven languages. He and his wife Laurie split their time between their home and ranch in Wyoming.
Praise for Vicious Circle

“This outing is the most suspenseful yet in this world-class series, setting a new standard for Box.”—Publishers Weekly (starred review)

“We’ve noted previously how the fully fleshed family dynamic is one of this series’ enduring strengths, and that pays dividends here as we viscerally feel Joe’s fear for his loved ones and his powerlessness to protect them. Box masterfully tightens the suspense until we’re caught in a vicious circle of our own and unable to stop reading.”—Booklist

“C. J. Box is back and better than ever.”—Providence Journal

Praise for Off the Grid

“With this exceptional entry, Box solidifies his place at the upper end of the crime fiction pantheon.”—Publishers Weekly (starred, boxed review)

“Filled with high suspense, formidable characters, and an action-packed ending more vivid than most movies. Off the Grid never falters as Box again delivers an exceptional thriller.”—South Florida Sun-Sentinel

“You can’t help turning the pages and holding your breath until you find out where this scary, all-too-plausible caravan is heading.”—Kirkus Reviews

“A terrorist thriller with a uniquely western flair...This is a breakneck story that Pickett fans will want to read in one sitting.”—Booklist

“Picking up a new C. J. Box thriller is like spending quality time with family you love and have missed....It’s a rare thriller series that has characters grow and change. An exciting reading experience for both loyal fans as well as newcomers.”—Associated Press

“A terrific read yet again from C. J. Box.”—Suspense Magazine

“Off the Grid is a warning of sorts in that it shows how U.S. national security is vulnerable to a terrorist attack. It is not only informative, but challenges people’s minds as they learn about western culture. To date this might just be one of Box’s best.”—Military Press

“C. J. Box continues his spectacular roll with the darkly mesmerizing Off the Grid....Pickett and Romanowski have become the gold standard, playing off each other perfectly as different sides of the same coin.”—The Providence Journal