Out of Range (A Joe Pickett Novel #5) (Paperback) 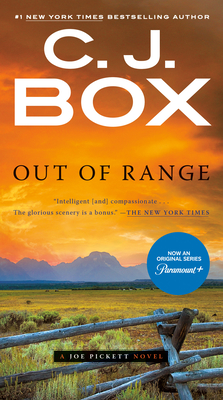 Out of Range (A Joe Pickett Novel #5) (Paperback)

This is book number 5 in the A Joe Pickett Novel series.

Wyoming game warden Joe Pickett is about to become the hunted in this suspenseful thriller in the #1 New York Times bestselling series.

When a good friend and fellow warden kills himself, Joe Pickett is chosen to temporarily run his Teton district. But Jackson, Wyoming, is a far cry from Joe's hometown of Saddlestring—and it doesn't help that now Joe feels compelled to investigate  the circumstances surrounding his friend's suicide. But as he comes closer to the truth, the more his own life spirals out of control—and he realizes if he isn't careful, he may be Jackson's next victim...
C. J. Box is the #1 New York Times bestselling author of the Joe Pickett series, five stand-alone novels, and the story collection Shots Fired. He has won the Edgar, Anthony, Macavity, Gumshoe, and two Barry awards, as well as the French Prix Calibre .38 and a French Elle magazine literary award. His books have been translated into twenty-seven languages. He and his wife Laurie split their time between their home and ranch in Wyoming.
Praise for Out of Range

“An unforgettably tense trip into the high country...Box's depiction of family tensions rings true. This fifth in a series is a Western lover's mystery, relying heavily on guns and honor; clearly, Joe's the real sheriff in town.”—Library Journal (starred review)