Six Feet Over It (Paperback) 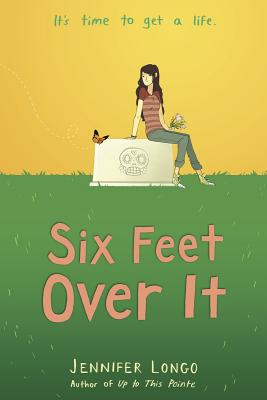 Six Feet Over It (Paperback)


Email or call for price
This unforgettable new voice in contemporary YA is perfect for fans of John Green, Libba Bray, and Jennifer Niven.

No one is more surprised than Leigh when her father buys a graveyard. Less shocking is the fact that he’s too lazy to look farther than the dinner table for employees. Working the literal graveyard shift, she becomes great at predicting headstone choice (mostly granite) and taking notes with one hand while offering Kleenex with the other.

Sarcastic and smart, Leigh should be able to quit this stupid after-school job. But her world’s been turned upside down by the sudden loss of her best friend and the appearance of Dario, the slightly-too-old-for-her gravedigger. Can Leigh move on, if moving on means it’s time to get a life?

Funny and heart-wrenchingly beautiful, Jennifer Longo’s YA debut about a girl surrounded by death will change the way you look at friendship, love, and life.

More Praise for Six Feet Over It:

“A vibrant voice. . . . Readers will rejoice.” —The Bulletin, Starred

“A wildly funny coming-of-age story about life, love, death, and everything in between.” —Sarah McCarry, author of All Our Pretty Songs

“Terrific. Longo had me at ‘graveyard’ and then dug me in deeper with wit, dark humor, and splendid characters.” —Lisa Brown, New York Times bestselling author

“Stands out for its unusual setting and also the sarcasm and caustic humor of its protagonist.” —The Horn Book Review

“Hilarious, clever, and poignant.” —SLJ
JENNIFER LONGO holds an MFA in Writing for Theater from Humboldt State University. She credits her lifelong flair for drama to parents who did things like buy the town graveyard and put their kids to work in it—because how hilarious would that be? Turns out, pretty hilarious. Jennifer lives in Seattle, Washington, with her husband and daughter and writes about writing at jenlongo.com.
Praise for Six Feet Over It:

“A vibrant voice. . . [A] perceptive and at times deeply moving view of people in loss. Leigh’s raw deal will elicit indignant sympathy, and readers will rejoice at her triumphant reentry into the world.”
— The Bulletin, Starred

“Terrific. Longo had me at ‘graveyard’ and then dug me in deeper with wit, dark humor, and a splendid collection of characters.”
—Lisa Brown, New York Times bestselling author

“A bighearted, wildly funny, and deeply poignant coming-of-age story about life, love, death, and everything in between.”
—Sarah McCarry, author of All Our Pretty Songs