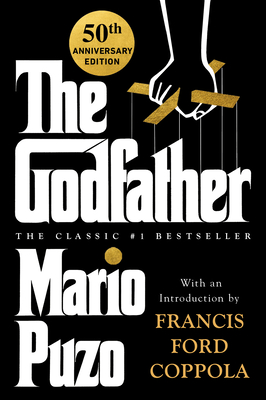 Mario Puzo’s classic saga of an American crime family that became a global phenomenon—nominated as one of America’s best-loved novels by PBS’s The Great American Read.

With its brilliant and brutal portrayal of the Corleone family, The Godfather burned its way into our national consciousness. This unforgettable saga of crime and corruption, passion and loyalty continues to stand the test of time, as the definitive novel of the Mafia underworld.

A #1 New York Times bestseller in 1969, Mario Puzo’s epic was turned into the incomparable film of the same name, directed by Francis Ford Coppola, which won the Academy Award for Best Picture. It is the original classic that has been often imitated, but never matched. A tale of family and society, law and order, obedience and rebellion, it reveals the dark passions of human nature played out against a backdrop of the American dream.

With a Note from Anthony Puzo and an Afterword by Robert J. Thompson
The son of Italian immigrants who moved to the Hell’s Kitchen area of New York City, Mario Puzo was born on October 15, 1920. After World War II, during which he served as a U.S. Army corporal, he attended City College of New York on the G.I. Bill and worked as a freelance writer. During this period he wrote his first two novels The Dark Arena (1955) and The Fortunate Pilgrim (1965).

When his books made little money despite being critically acclaimed, he vowed to write a bestseller. The Godfather (1969) was an enormous success. He collaborated with director Francis Ford Coppola on the screenplays for all three Godfather movies and won Academy Awards for both The Godfather (1972) and The Godfather, Part II (1974). He also collaborated on the scripts for such films as Superman (1978), Superman II (1981), and The Cotton Club (1984). He continued to write phenomenally successful novels, including Fools Die (1978), The Sicilian (1984), The Fourth K (1991), and The Last Don (1996). Mario Puzo died on July 2, 1999. His final novel, Omerta, was published in 2000.
“A staggering triumph...The definitive novel about a sinister fraternity of crime.”—The Saturday Review

“You can’t stop reading it, and you’ll find it hard to stop dreaming about it.”—New York Magazine