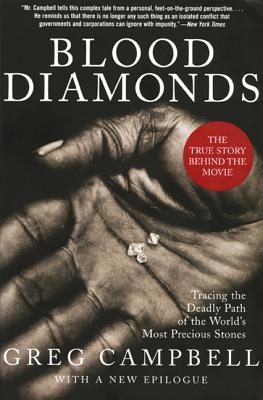 
Usually Ships in 1-5 Days
First discovered in 1930, the diamonds of Sierra Leone have funded one of the most savage rebel campaigns in modern history. These “blood diamonds” are smuggled out of West Africa and sold to legitimate diamond merchants in London, Antwerp, and New York, often with the complicity of the international diamond industry. Eventually, these very diamonds find their way into the rings and necklaces and brides and spouses the world over.

Blood Diamonds is the gripping tale of how diamond smuggling works, how the rebel war has effectively destroyed Sierra Leone and its people, and how the policies of the diamonds industry—institutionalized in the 1880s by the De Beers cartel—have allowed it to happen. Award-winning journalist Greg Campbell traces the deadly trail of these diamonds, many of which are brought to the world market by fanatical enemies. These repercussions of diamond smuggling are felt far beyond the borders of the poor and war-ridden country of Sierra Leone, and the consequences of overlooking this African tragedy are both shockingly deadly and unquestionably global.

In this newly revised and expanded edition, investigative journalist Greg Campbell returns to West Africa ten years later to reveal how despite widespread exposure to the corruption and greed of the diamond trade, it continues unabated as the region struggles politically, ecologically, and economically.

Greg Campbell is a freelance journalist and former editor of the Boulder Weekly. He reported a series of articles from Sarajevo just after the Dayton Accord. He lives in Longmont, CO.