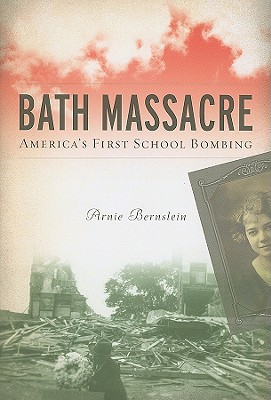 
Email or call for price
"With the meticulous attention to detail of a historian and a storyteller's eye for human drama, Bernstein shines a beam of truth on a forgotten American tragedy. Heartbreaking and riveting."
---Gregg Olsen, New York Times best-selling author of Starvation Heights

"A chilling and historic character study of the unfathomable suffering that desperation and fury, once unleashed inside a twisted mind, can wreak on a small town. Contemporary mass murderers Timothy McVeigh, Columbine's Dylan Klebold, and Virginia Tech's Seung-Hui Cho can each trace their horrific genealogy of terror to one man: Bath school bomber Andrew Kehoe."
---Mardi Link, author of When Evil Came to Good Hart On May 18, 1927, the small town of Bath, Michigan, was forever changed when Andrew Kehoe set off a cache of explosives concealed in the basement of the local school. Thirty-eight children and six adults were dead, among them Kehoe, who had literally blown himself to bits by setting off a dynamite charge in his car. The next day, on Kehoe's farm, what was left of his wife---burned beyond recognition after Kehoe set his property and buildings ablaze---was found tied to a handcart, her skull crushed. With seemingly endless stories of school violence and suicide bombers filling today's headlines, Bath Massacre serves as a reminder that terrorism and large-scale murder are nothing new.