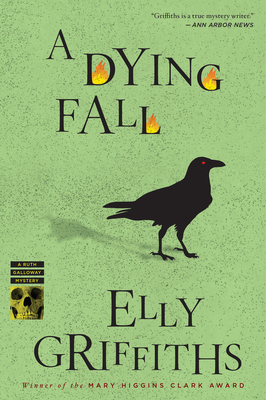 This is book number 5 in the Ruth Galloway Mysteries series.

When Ruth Galloway learns that her old university friend Dan Golding has died in a house fire, she is shocked and saddened. But when she receives a letter that Dan had written just before he died, her sadness turns to suspicion.The letter tells of a great archaeological discovery, but Dan also says that he is scared for his life.

Was Dan’s death linked to his find? The only clue is his mention of the Raven King, an ancient name for King Arthur. When she arrives in Lancashire, Ruth discovers that the bones reveal a shocking fact about King Arthur—and that the bones have mysteriously vanished.

The case draws in DCI Nelson, determined to protect Ruth and their eighteen-month-old daughter, Kate. But someone is willing to kill to keep the bones a secret, and it is beginning to look as if no one is safe.
ELLY GRIFFITHS is the author of the Ruth Galloway and Brighton mystery series, as well as the standalone novels The Stranger Diaries, winner of the Edgar Award for Best Novel, and The Postscript Murders. She is the recipient of the CWA Dagger in the Library Award and the Mary Higgins Clark Award. She lives in Brighton, England.

"The latest captivating and enjoyable Griffiths novel does not disappoint. Set along England's northern coast, the story brings Ruth, an archaeologist whose work with old bones has involved her in several police cases, to a back-water university in Lacashire, where one of her old school friends has been murdered. The victim had been working in a dig that seemed to involve the Raven King, aka King Arthur. . . . The characters are strong and believable, the plot intriguing and well developed, and there is plenty of atmosphere." -- San Jose Mercury-News "Both plot strands make compelling reading, but the way Griffiths interweaves them is absolutely masterful. As with all Ruth Galloway mysteries, the application of forensic archaeology is intriguing. . . readers are in for a really good time with this flesh-and-blood bone expert."—Booklist, STARRED

"Another gem packed with offbeat, well-developed characters and a quirky, challenging mystery."—Kirkus —