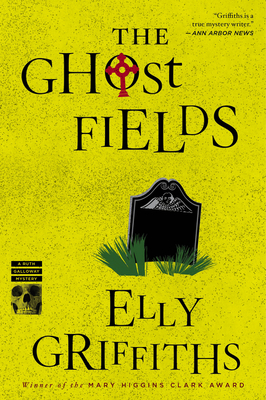 This is book number 7 in the Ruth Galloway Mysteries series.

The chilling discovery of a downed World War II plane with a body inside leads Ruth and DCI Nelson to uncover a wealthy family’s secrets in this Ruth Galloway mystery.

It’s a blazing hot summer in Norfolk when a construction crew unearths a downed American fighter plane from World War II with a body inside. Forensic archeologist Ruth Galloway determines that the skeleton couldn’t possibly be the pilot, and DNA tests identify the man as Fred Blackstock, a local aristocrat long presumed dead—news that seems to frighten his descendants. Events are further complicated by a TV company that wants to make a film about Norfolk’s deserted air force bases, the so-called ghost fields, which the Blackstocks have converted into a pig farm. As production begins, Ruth notices a mysterious man loitering at Fred Blackstock’s memorial service. Then human bones are found on the family’s pig farm and the weather quickly turns. Can the team outrace a looming flood to find the killer?

ELLY GRIFFITHS is the author of the Ruth Galloway and Brighton mystery series, as well as the standalone novels The Stranger Diaries, winner of the Edgar Award for Best Novel, and The Postscript Murders. She is the recipient of the CWA Dagger in the Library Award and the Mary Higgins Clark Award. She lives in Brighton, England.

"The unearthing in Norfolk of a WWII-era U.S. plane, with its pilot in his seat and a bullet hole in his temple, propels British author Griffiths's well-crafted seventh mystery featuring forensic archeologist Ruth Galloway (after 2014's The Outcast Dead). The pilot is identified as Frederick J. Blackstock, a scion of a prominent Norfolk family, who served in the American air force, though Fred was supposedly lost at sea in a different plane and presumed dead. The decision of an American TV company to do a program about Norfolk's abandoned airfields brings Frank Barker, an academic Ruth was attracted to while working together on an earlier case, back into her life. The arrival of the film company and Fred's American daughter, Nell Blackstock Goodheart, sets the stage for a series of deaths and personal revelations that culminates in Ruth's being trapped in massive Blackstock Hall during a terrible storm. Griffiths nicely blends history and romance with gothic elements."--Publishers Weekly —