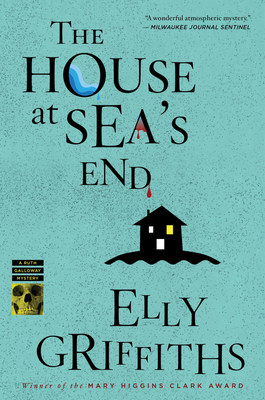 This is book number 3 in the Ruth Galloway Mysteries series.

Just back from maternity leave, forensic archeologist Ruth is finding it hard to juggle motherhood and work when she is called in to investigate human bones that have surfaced on a remote Norfolk beach. The presence of DCI Harry Nelson, the married father of her daughter, does not help. The bones, six men with their arms bound, turn out to date back to World War II, a desperate time on this stretch of coastland.

As Ruth and Nelson investigate, Home Guard veteran Archie Whitcliffe reveals the existence of a secret the old soldiers have vowed to protect with their lives. But then Archie is killed and a German journalist arrives, asking questions about Operation Lucifer, a plan to stop a German invasion, and a possible British war crime. What was Operation Lucifer? And who is prepared to kill to keep its secret?

"[A] page-turning mystery . . . it provides a wholly satisfying whodunit as well as a good reason to look up the other two [books in the series] . . . Griffiths's Galloway is a likable and alluring character.”—Associated Press
ELLY GRIFFITHS is the author of the Ruth Galloway and Brighton mystery series, as well as the standalone novels The Stranger Diaries, winner of the Edgar Award for Best Novel, and The Postscript Murders. She is the recipient of the CWA Dagger in the Library Award and the Mary Higgins Clark Award. She lives in Brighton, England.

Praise for The House at Sea's End "A wonderful atmospheric mystery."- Milwaukee Journal Sentinel Praise for The Ruth Galloway Mystery series: "Elly Griffiths draws us all the way back to prehistoric times...Highly Atmospheric."--New York Times Book Review "Griffiths’s third (The Janus Stone, 2010, etc.) offers not only an excellent mystery but a continuing exploration of the lives of complex...characters." -Kirkus Reviews (starred) "Expect to be swept away by Griffith’s third compelling forensic anthropology entry (after The Crossing Places and The Janus Stone). The author is a past Mary Higgins Clark Award winner, and her gothic, romantic-suspense workmanship is superb."-Library Journal (starred) "Solid characterization, believable forensic science, great atmosphere, and a mystery that stretches back decades all make this another winner from the talented Griffith." -Booklist "Forensic archaeologist Ruth Galloway stirs up fears and passions among the living even as she unearths Iron Age remains. She’s an uncommon, down-to-earth heroine whose acute insight, wry humor, and depth of feeling make her a thoroughly engaging companion." –Erin Hart, Agatha and Anthony Award nominated author of HAUNTED GROUND and LAKE OF SORROWS "Forensic archeologist and academic Ruth Galloway is a captivating amateur sleuth - an inspired creation. I identified with her insecurities and struggles, and cheered her on. The Saltmarsh where Ruth lives in isolation conjures a background of intense menace propelling this gripping story to a surprising and terrifying ending. This is a book rich in plot, character and setting and heralds an exciting new voice on the crime scene."-- Louise Penny   —