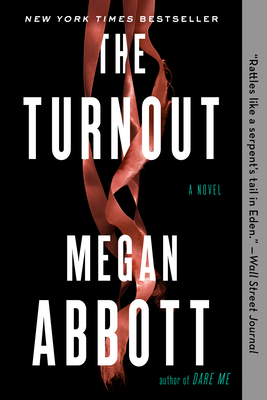 “The Turnout is a deliciously uncomfortable story, from the brutality imposed on dancers’ bodies to the uneasy dynamics of sisterly relationships and the tension when someone new intrudes on their domain.”
— Lexi Beach, The Astoria Bookshop, Astoria, NY

With their long necks, sheer tights, and taut buns, Dara and Marie Durant have only known the course of a well-bred dancer. Not much changes when their parents face death in a tragic accident. As Dara and Marie take over their mother's duty of running the Durant School of Dance, along with Charlie, Dara's husband and once their mother's prized student, the sisters perfect a fine dance, circling around one another, six days a week, keeping the studio thriving.

But when another eerily suspicious accident occurs, just at the onset of the school's annual performance of The Nutcracker—a season of tense competition, provoked anxiety, and wild exhilaration—an interloper arrives and threatens the sisters' delicate balance.

With its uncanny insight and writing that haunts, The Turnout is Megan Abbott at the height of her game—a sharp and strange dissection of family ties and sexuality, femininity, and power, and a sinister tale that is both alarming and irresistible.
Megan Abbott is the award-winning author of ten novels, including Give Me Your Hand, You Will Know Me, The Fever, Dare Me, and The End of Everything. She received her PhD in literature from New York University. Her writing has appeared in The New York Times, the Wall Street Journal, the Los Angeles Times Magazine, The Guardian, and The Believer. She is the co-creator and executive producer of USA's adaptation of Dare Me and was a staff writer on HBO's David Simon show, The Deuce. Abbott lives in New York City.
Winner of the Los Angeles Times Book Prize
Finalist for the International Thriller Writers Award
Longlisted for the Joyce Carol Oates Prize

"Pulsing with suspense." –People, "Book of the Week"

"Abbott's novels are often described as crime fiction, and, while indeed she works with mystery and suspense and draws on noir and Gothic tropes, her goal seems less to construct intricate, double-crossing plot problems than to explore the dark side of femininity....In other words, Megan Abbott is a mood." –The New York Times Book Review

“Abbott is a legend for good reason. No one combines the style of classic noir with the psyches of sophisticated men and women who are willing to do anything—anything—to succeed better than Abbott. Her latest is a dizzyingly fascinating story of a family-owned dance studio and the weight of unrequited ambition. An instant classic.” –Washington Post

“Compelling…Abbott leaves her audience riveted with each twist and turn, leading to a dramatic denouement. It’s a fantastic work in every way.” –Manhattan Book Review

“Ms. Abbott’s prose has never been more impressive than in this whirlpool of psychological suspense, shocking images, well-wrought metaphors—and one final twist that rattles like a serpent’s tail in Eden.” ­–Wall Street Journal

“Abbott is a master of atmosphere, and in the blood, sweat, tears, bruises, ripped toenails, broken bones, rivalries, desires, and tutu-pink dreams that fill the studio during its annual production of The Nutcracker, she creates a world of almost unbearable tension, pirouetting ever further into darkness.” –Entertainment Weekly

“[A] beautifully accomplished thriller…From the first page to the reveal at the end, a palpable sense of menace and the sympathy we feel for Dara as her world unravels make it impossible to look away.” –Minneapolis Star Tribune

"Abbott—so good at plucking the dark and twisted strands of female friendships and rivalries in books like You Will Know Me and Give Me Your Hand—fashions her unsettling new novel around a ballet academy run by three high-strung former dancers, two of them sisters." –The New York Times

“While undoubtedly one of our best crime novelists, Abbott has also always struck me as akin to an anthropologist….In The Turnout, Abbott delves into the rarified world of ballerinas, astutely noting the symbols and signals underlying the romantic image.” –The Paris Review

"No one takes seemingly harmless environments and cracks them open to reveal their dark heart quite like Megan Abbott, and she does it again here with a tense narrative about the backstage antics of a ballet school that looks at femininity, anxiety, and power." —Boston Globe

"Mines the creepy underside of ballet....Abbott takes her breathless reader to some very dark places, but also to beauty." –Seattle Times

“The Turnout is a page-turner, suffused with dread even when the scene being described involves doing paperwork with a contractor….If you enjoy twisty crime novels with unmistakably dark subject matter, you’ll do well to put yourself in Abbott’s capable hands for a few hundred pages. You’ll never look at a pointe shoe the same way again.” –Chicago Review of Books

“What I love about Abbott's books is she's made this great niche for herself, where she applies the tone and style of film noir to stereotypically feminine areas of interest. . . . I always love her stuff, and The Turnout is no exception.” —Alan Sepinwall for NPR

“An excavation of the dark sides of family and femininity.” –Elle

“This is a deliciously creepy thriller about competition and family ties.” –Real Simple

“[The Turnout] is as tightly wound as a dancer’s bun.” –Good Housekeeping

“There’s no one better than Abbott at exploring issues of femininity and power struggles, and getting at the visceral heart of both. Fans of Black Swan and The Red Shoes are bound to be obsessed.” –Refinery29

“Come for the ballet references, stay for the family secrets and wild ending.” ­–theSkimm

“The Turnout is an intriguing crime novel about family, power, and sexuality.” –The A.V. Club

“Abbott’s prose is dazzlingly precise and her portrayal of student rivalries razor-sharp in this taut and psychologically gripping novel.” –The Guardian

“[A] big, rich literary novel. A carefully controlled but free-flowing, almost musical style; episodic in structure, but with an entirely coherent theme that’s implied, unmistakably, but never presented explicitly (there is no preaching to be tolerated)….Really, a lovely read, whether you come to it with that yearning or not.” —Shawangunk Journal

“With clever storytelling that slowly and deliberately unspools, Abbott tells a tale about an unconventional family that holds on to generational trauma....Like any good firework show, Abbott creates a number of small explosions until the grand finale—and you’ll never see if coming.” –Apartment Therapy

“[The Turnout] uses the world of ballet as the setting for a story of fraught familial connections and ominous acts.” –Inside Hook

“[The Turnout] will delight readers who crave her combination of psychological insight and deep engagement with discipline—here, in a family-owned ballet studio.” ­­–Virtuoso Life

“Abbott is back full force with a story that takes place in a family-run ballet studio. If Showtime dramas have taught us anything, it’s that ballet is full of unexpected thrills and chills.” –Glitter Guide

“The Turnout unfolds like a dark fairy tale, unpacking the rigid demands of femininity. Abbott fans and suspense lovers alike won’t be disappointed with this exploration of human frailty and twisted love.” –LitHub

“Abbott is not only a suspense author at the top of her game, she’s also a scholar, and The Turnout promises to be both homage to classic tropes and visionary model for their evolution.“ —CrimeReads

“At once engaging and unnerving.” –Reader’s Digest

“Beautifully dark suspense . . . Abbott keeps the twists coming until the final pages. The Turnout is the kind of gripping, unnerving page turner we have come to expect from an author who does noir better than almost anyone." —BookPage (starred review)

“The Turnout is one of those slow-burning thrillers where every word and gesture carries immense weight….As both Dara and Marie make key choices, the sisters’ relationship tears apart, exposing each person for who they truly are, leaving deadly, sinister destruction in its wake.” –BookTrib

“[The Turnout] is atmospheric, suspenseful, and full of marvelously juicy behind-the-scenes details.” –BookReporter

“Gut-punching noir…Abbott is pitch-perfect at making the sisters’ complex dynamic and mix of emotions plausible and painful, while capturing the competitiveness and cruelty of children’s ballet, where every young girl wishes to be the center of attention. This look at the darker side of the dance world demonstrates why Abbott has few peers at crafting moving stories of secrets and broken lives.” ­–Publishers Weekly (starred review)

“Abbott has a top-notch ability to reveal the dark undercurrents of women’s relationships and sexuality. Her taut, unsettling writing creates tension through the slightest actions and phrases, and keeps the pages turning. This is clever, chilling psychological suspense at its best.” –Library Journal (starred review)

“Abbott brilliantly explores the psychosexual undercurrents throbbing throughout this haunting novel, from the dancers’ pointe shoes…through even the Nutcracker itself.” –Booklist (starred review)

“The mesmerizing prose will keep you turning the pages. Abbott is a master of thinly veiled secrets often kept by women who rage underneath their delicate exteriors.” –Kirkus Reviews

"One of the most well-known and acclaimed thriller writers working today is back with a twisted tale of fraying ties at a family-run ballet studio." –BookPage

"Immersive, seductive . . . Abbott’s singular and inimitable voice defines the tension perfectly throughout, scratching across the page like the sharpest knife." —Rain Taxi

“There’s no one who captures the atmosphere of a tight-knit hothouse world, in all its feverish beauty and brutality, quite like Megan Abbott.” –Tana French, author of The Searcher

"All one needs to know about a Megan Abbott book is that it's a Megan Abbott book -- dreamy, sexy, a deep dive into a subculture that has been exhaustively researched. The Turnout is all those things and more, taking you so far into the world of a small ballet school that you feel the characters' aches and pains in your joints, your feet, and, most dangerous of all, your heart." –Laura Lippman, author of Lady in the Lake

“There is not a writer alive who is better at investigating the tension and threat of violence at the center of women’s lives than Megan Abbott. Megan goes into the heart of female spaces and finds the ugly in all that pretty, the dark in all that light, with breath-taking suspense. The Turnout has notes of James M. Cain and Alfred Hitchcock, but it’s better because it’s so fresh and unexpected, so wholly revelatory. I turned page after page, holding my breath in fear, and also excitement, about what might happen in this run-down ballet school, what blood red might be lurking behind all that pink. This is Megan Abbott working at the absolute height of her talent.” –Attica Locke, author of Bluebird, Bluebird and Heaven, My Home

“Megan Abbott is a master of atmosphere, and she captures the Durant School of Ballet—a tinderbox of promise and perfectionism, innuendo and fierce desire, of tension twisted to a breaking point—in all its merciless extravagance. The Turnout is a bewitching climb up a spiral staircase into the inner sanctum of the Durant family, a house of mirrors in which nothing is exactly what it seems. This novel pounds with blood and grips you in its teeth: Megan Abbott is unafraid as ever of the darkness that makes us human.” –Chloe Benjamin, author of The Immortalists

“Abbott creates a dark and mesmerizing world and, as always, is so brilliant at portraying women and girls and their competition and complexities....It makes Black Swan look like a children’s story.” –Harriet Tyce, author of Blood Orange