The 22 Murders of Madison May (Paperback) 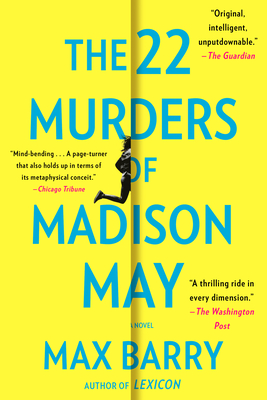 The 22 Murders of Madison May (Paperback)


Usually Ships in 1-5 Days
From the critically acclaimed author of Jennifer Government and Lexicon comes mind-bending speculative psychological suspense about a serial killer pursuing his victim across time and space, and the woman who is determined to stop him, even if it upends her own reality.

Young real estate agent Madison May is shocked when a client at an open house says these words to her. The man, a stranger, seems to know far too much about her, and professes his love--shortly before he murders her.

Felicity Staples hates reporting on murders. As a journalist for a midsize New York City paper, she knows she must take on the assignment to research Madison May's shocking murder, but the crime seems random and the suspect is in the wind. That is, until Felicity spots the killer on the subway, right before he vanishes.

Soon, Felicity senses her entire universe has shifted. No one remembers Madison May, or Felicity's encounter with the mysterious man. And her cat is missing. Felicity realizes that in her pursuit of Madison's killer, she followed him into a different dimension--one where everything about her existence is slightly altered. At first, she is determined to return to the reality she knows, but when Madison May--in this world, a struggling actress--is murdered again, Felicity decides she must find the killer--and learns that she is not the only one hunting him. Traveling through different realities, Felicity uncovers the opportunity--and danger--of living more than one life.
Max Barry is the author of numerous novels, including Providence, Jennifer Government, Company, Machine Man, and Lexicon. He is also the developer of the online nation simulation game NationStates. Prior to his writing career, Barry worked at tech giant HP. He lives in Melbourne, Australia, with his wife and two daughters.
“Mind-bending….A page-turner that also holds up in terms of its metaphysical conceit.”—The Chicago Tribune

“Mr. Barry avoids the obvious sci-fi option of thinking up lots of exciting worlds, and takes the grittier route of imagining intrusions into the underbelly of this one…Unnerving. He navigates the multiverse and the concepts of string theory and chaos theory with frightening conviction. Let’s hope he just made it all up.”—The Wall Street Journal

“Beware Max Barry. Once his story grabs hold, you will forget to eat, sleep, and bathe until you’re left with the world’s worst book hangover. An exhilarating rocket shot of a thriller tempered with Barry’s trademark wit and warmth.”—David Yoon, author of Version Zero and Frankly in Love

"Gripping… this is the sort of tricksiness Barry was put on Earth for."—The Times (UK)

“With unrelenting tension, Max Barry weaves a complex tapestry where a sociopath's insatiable obsession knows no bounds, not even time and space, and only two things are certain - he will kill her again because he's killed her before. I devoured this novel in one sitting.”—J.D. Barker, author of A Caller's Game

“A crime thriller that tripped and fell through a manhole and into the multiverse. It’s frenetic and funny and gut-wrenching by turns, and I absolutely could not put it down. You need to read this book. Do it. Do it now.”—Edward Ashton, author of The End of Ordinary