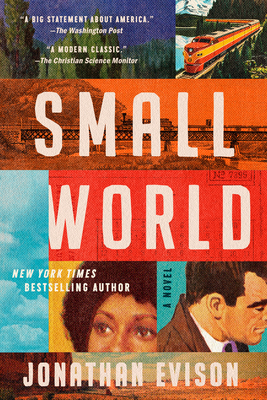 “From the Gold Rush with Chinese, Irish, and Native Americans among the protagonists, Evison alternates time — work on the rails to Amtrak; gold panning to modern West Coast life — tying generations together in a splendid sleight of hand.”
— Pat Rutledge, A Book For All Seasons, Leavenworth, WA

This illuminating journey across intertwining generations of Americans begins on a train, a potent symbol of our country’s promise and expansion, as well as our flaws. Crisscrossing time and place, Evison nimbly weaves the story of five families as they rumble through history, always with the hope of reaching the American dream. From two Irish children who are orphaned not long after their arrival in the 1850s, to a high school basketball star in 2019 – whose single mom lives to give him the tools and foundation for an education and better life than her own – these stories resonate with the obstacles and triumphs that our beautiful, if imperfect, country offers. All aboard!

— Victoria
Four modern families aboard a passenger train hurtle into the night.

One hundred and seventy years earlier their forebearers make their way in a young nation built on grand promises.

Each family follows their own path, only to find that their destinies are linked inextricably, the culmination of five generations of shared history.

Jonathan Evison’s Small World is a novel that speaks to the present moment, a grand adventure that explores the American experiment in its most human and intimate aspects, a novel that asks whether America has made good on those early promises.

Humming with heart and adventure, and love and hope and ideas, Small World delivers the thrill of great storytelling straight through to its deeply satisfying conclusion.
Jonathan Evison is the author of the novels All About Lulu; West of Here; The Revised Fundamentals of Caregiving; This Is Your Life, Harriet Chance!; Lawn Boy; and Legends of the North Cascades. He lives with his wife and family in Washington State.
A New York Times Editors' Pick | Joyce Carol Oates Prize longlist | One of The Christian Science Monitor's and Bookreporter's “Best Books of 2022” | One of the Los Angeles Times's “10 Books to Add to Your Reading List” | One of Book Culture's Most Anticipated Reads | An Amazon “Best of the Month” Pick in Literature and Fiction

Praise for Small World
“This is more than a sprawling, big-hearted, blue-collar novel, it’s a Dickensian saga on a grand American scale, filled with beauty and violence, tragedy and redemption. This is the kind of historical fiction that keeps you up all night, burning in your veins like kerosene.”—Jamie Ford, New York Times bestselling author of Hotel on the Corner of Bitter and Sweet

“A creative, insightful work of fiction. Evison pulls off a wonderful high-wire act of storytelling that few would attempt, and even fewer could achieve so sharply!”—Jason Mott, author of the National Book Award winner Hell of a Book

“A modern classic. The book is a vast yet intimate tale about the American dream, and the people for whom the vision is yet unfulfilled.”—The Christian Science Monitor

“Riveting . . . Small World feels like a reminder that not a single one of us got here alone. We have inherited strengths from the individual tales of our ancestors, but we are still deeply dependent upon each other.”—Star Tribune (Minneapolis)

“The novel is easy to love in part because it deals in generosity and hope. . . . Small World is ambitious, showing our interconnectedness across time, place, and cultures.”—The New York Times Book Review

“Evison’s writing is best when his powerful feelings for injustice and privilege grate against one another. . . . Small World feels like a big statement about America . . . and it’s filled with weighty ideas and worthy commentary on oppression and racism.”—The Washington Post

“Masterpiece . . . Such masterful strokes seem to qualify Small World as the quintessential great American novel, as Evison eloquently shows that perhaps the most authentically American ideal is the ongoing, blended palette of stories.”—Booklist (starred review)

“Piece by piece, Evison successfully corrals this sprawling history into a cohesive whole, coalescing it into a vivid mosaic. . . . Throughout it all, Evison underscores a sense of a shared America, not so much in the kumbaya mythology of the melting pot but a feeling—oft-neglected these days—that we are all in this nation-building adventure together.”—BookPage (starred review)

“Master storyteller Jonathan Evison's seventh novel is a sweeping epic set over 170 years of United States history. . . . The fast-paced back-and-forth of the novel underscores the image of the 'small world' that is the United States, with its heartwarming dreams achieved, its still-deferred hopes, and the diverse protagonists, whom readers will miss when their epic story ends.”—Shelf Awareness (starred review)

“[An] epic that seems particularly American in its wide ambition and generosity of spirit.”—People

“A fantastic novel to lose yourself in. . . . His best one yet.”—Book Riot

“Readers of Small World will find it hard to put the book down. The author does a masterful job of revealing the stories' elements.”—Midwest Book Review

“Ambitious . . . Evison’s depiction of the characters’ family histories builds significance as contemporary racial inequalities and class disparities are brought into relief against those of the 1850s. . . . Thick with insights.”—Publishers Weekly

“The new novel by Jonathan Evison may be one of the best books of the year and it’s only January. A really well-written, character-driven story . . . You won’t want to put this book down. You will not be disappointed.”—Red Carpet Crash

“Small World is . . . about hope for the future. Hope that we can change things—that we can help each other in ways both big and small. And in this time of polarization, we could all use a reminder of how connected we really are.”—Open Letters Review

“I didn’t want to see the end of this Small World.”—Bookreporter.com

“Jonathan Evison's new novel Small World is, no exaggeration, his masterpiece. Small World is a huge, ambitious, but incredibly immersive great American novel about how we're all connected in striving for the great American dream. A huge cast of diverse characters, both in the present and in the nineteenth century, populate this novel with interconnected stories about how beating injustice and flourishing in this great American experiment is at its essence a team sport. A paragon of the genre. Highly, highly recommend.”—The New Dork Review of Books

“Each storyline is rendered with respect and often beauty. . . . The final scene is deeply touching.”—Historical Novel Society

“[An] immersive, page-turning ride of a spellbinding story that sheds light on the good, the bad, and the ugly of 170 years of nation-building.”—Cascadia Daily News

“Small World is a great ride into the complicated, dark hearts of the American story, and it reads like Evison’s best work, to date.”—Vol. 1 Brooklyn