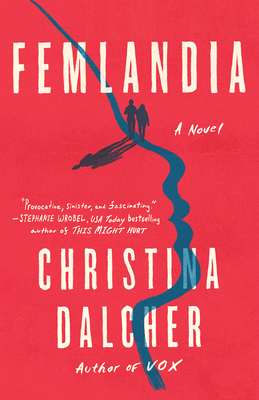 
Usually Ships in 1-5 Days
One of PureWow’s 9 Books We Can’t Wait to Read in October!

A chilling look into an alternate near future where a woman and her daughter seek refuge in a women-only colony, only to find that the safe haven they were hoping for is the most dangerous place they could be.

Miranda Reynolds always thought she would rather die than live in Femlandia. But that was before the country sank into total economic collapse and her husband walked out in the harshest, most permanent way, leaving her and her sixteen-year-old daughter with nothing. The streets are full of looting, robbing, and killing, and Miranda and Emma no longer have much choice—either starve and risk getting murdered, or find safety. And so they set off to Femlandia, the women-only colony Miranda's mother, Win Somers, established decades ago.

Although Win is no longer in the spotlight, her protégé Jen Jones has taken Femlandia to new heights: The off-grid colonies are secluded, self-sufficient, and thriving—and Emma is instantly enchanted by this idea of a safe haven. But something is not right. There are no men allowed in the colony, but babies are being born—and they're all girls. Miranda discovers just how the all-women community is capable of enduring, and it leads her to question how far her mother went to create this perfect, thriving, horrifying society.
Christina Dalcher earned her doctorate in theoretical linguistics from Georgetown University. She specializes in the phonetics of sound change in Italian and British dialects and has taught at several universities.

Her short stories and flash fiction appear in more than one hundred journals worldwide. Recognition includes the Bath Flash Fiction Award short list, nominations for the Pushcart Prize, and multiple other awards. She lives in Norfolk, Virginia, with her husband.
"Dalcher (Vox) puts a delightfully dark dystopian twist on Herland...this wildly provocative glimpse into the future is sure to spark lively discussions about humankind’s past, present, and future...Dalcher remains a writer to watch."—Publishers Weekly

“A master of the feminist dystopian novel...A no-holds-barred thriller and thought-provoking read for fans of Margaret Atwood’s The Handmaid’s Tale, Naomi Alderman’s The Power, and Kim Liggett’s The Grace Year.”—Library Journal

“Dalcher's latest is a cogent and timely exploration of the dangers of misandry and groupthink.”—Booklist

"Provocative, sinister, and fascinating, FEMLANDIA is full of complicated characters, with a gripping plot to boot. I read it with my breath held, unable to stop until I’d reached the explosive ending. You will definitely want to discuss this one with your book club."—Stephanie Wrobel, USA Today bestselling author of Darling Rose Gold