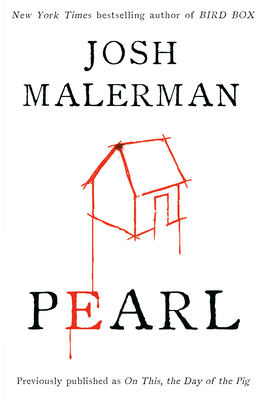 
Usually Ships in 1-5 Days
From Josh Malerman, the New York Times bestselling author of Bird Box and Malorie, comes the legend of Pearl, a strange new monster unlike any other in horror (previously published as On This, the Day of the Pig).

NAMED ONE OF THE BEST BOOKS OF THE YEAR BY THE WALL STREET JOURNAL • “Daring readers should find this tale of a malevolent telepathic pig to be a memorable experience.”—Booklist (starred review)

There’s something strange about Walter Kopple’s farm. At first it seems to be his grandson, who cruelly murders one of Walter’s pigs in an act of seemingly senseless violence. But then people in town begin to whisper that Walter’s grandson heard a voice commanding him to kill.

And that the voice belongs to a most peculiar creature: the pig named Pearl.

Walter is not sure what to believe. He knows he’s always been afraid of the strangely malevolent Pearl. But as madness and paranoia grip the town and the townspeople descend on Walter’s farm with violent wrath, they begin to discover that true evil wears a human face.

Josh Malerman is a New York Times bestselling author and one of two singer-songwriters for the rock band The High Strung. His debut novel, Bird Box, is the inspiration for the hit Netflix film of the same name. His other novels include Unbury Carol, Inspection, A House at the Bottom of a Lake, and Malorie, the sequel to Bird Box. Malerman lives in Michigan with his fiancée, the artist-musician Allison Laakko.
“Daring readers should find this tale of a malevolent telepathic pig to be a memorable experience. . . . The novel shares the same racing narrative that made Bird Box hard to put down and is Malerman’s most accomplished work outside of the Bird Box series.”—Booklist (starred review)

“A perfect, fast-paced slasher filled with violent, cinematic action sequences . . . Malerman delivers with another completely different yet equally crowd-pleasing and awesome horror novel that is not to be missed.”—Library Journal (starred review)