Alpha: Eddie Gallagher and the War for the Soul of the Navy SEALs (Paperback) 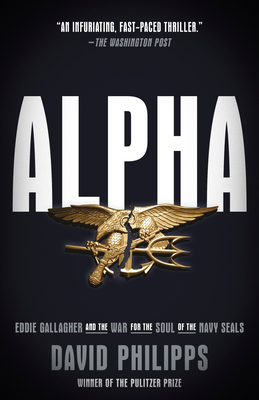 Alpha: Eddie Gallagher and the War for the Soul of the Navy SEALs (Paperback)


Usually Ships in 1-5 Days
An “infuriating, fast-paced” (The Washington Post) account of the Navy SEALs of Alpha platoon, the startling accusations against their chief, Eddie Gallagher, and the courtroom battle that exposed the dark underbelly of America’s special forces—from a Pulitzer Prize–winning reporter

WINNER OF THE COLORADO BOOK AWARD • “Nearly impossible to put down.”—Jon Krakauer, New York Times bestselling author of Where Men Win Glory and Into the Wild

In this “brilliantly written” (The New York Times Book Review) and startling account, Pulitzer Prize–winning New York Times correspondent David Philipps reveals a powerful moral crucible, one that would define the American military during the years of combat that became known as “the forever war.”

When the Navy SEALs of Alpha platoon returned from their 2017 deployment to Iraq, a group of them reported their chief, Eddie Gallagher, for war crimes, alleging that he’d stabbed a prisoner in cold blood and taken lethal sniper shots at unarmed civilians. The story of Alpha’s war, both in Iraq and in the shocking trial that followed the men’s accusations, would complicate the SEALs’ post-9/11 hero narrative, turning brothers-in-arms against one another and bringing into stark relief the choice that elite soldiers face between loyalty to their unit and to their country.

One of the great stories written about American special forces, Alpha is by turns a battlefield drama, a courtroom thriller, and a compelling examination of how soldiers define themselves and live with the decisions in the heat of combat.
David Philipps is an award-winning national correspondent for The New York Times, where he writes about the military. His work has appeared in the Los Angeles Times, the Chicago Tribune, The Philadelphia Inquirer, and The Seattle Times, among other publications. His military coverage won a Pulitzer Prize for national reporting, and he was twice named a Pulitzer finalist, for local reporting and for breaking news. His coverage of the violence at Fort Carson in the Colorado Springs Gazette won the Livingston Award, and his book Lethal Warriors won honorable mention for the J. Anthony Lukas Prize. He lives in Colorado Springs, Colorado, with his family.
“Meticulously assembled and brilliantly written . . . [a] remarkable and engrossing book.”—The New York Times

“A dogged researcher and gifted writer, Philipps turns the story of Gallagher’s rise, his alleged war crimes and the botched Navy prosecution into an infuriating, fast-paced thriller.”—The Washington Post

“Shakespearean . . . An excellent read from a seasoned reporter who covered the entire saga [of] Eddie Gallagher.”—The San Diego Union-Tribune

“Alpha is an important, infuriating, meticulously researched account of modern warfare that I found nearly impossible to put down.”—Jon Krakauer, New York Times bestselling author of Where Men Win Glory and Into the Wild

“This is one of the best books to come out of the Iraq war. It is also one of the saddest. There have been many books about Navy SEALs and snipers, but Alpha is by far the most important. I think it will be required reading for the Navy, as Black Hearts has become for the Army. Anyone who cares about the American military needs to read this.”—Thomas E. Ricks, bestselling author of Fiasco, First Principles, and The Generals

“This is a book to make your blood boil. Expertly reported and written, Alpha details a truly shameful national episode, and stands as a powerful corrective for those who mistake cruelty for toughness and equate war with murder.”—Mark Bowden, New York Times bestselling author of Black Hawk Down and Hue 1968

“Alpha is a phenomenally reported, deeply compelling portrait of moral courage and moral cowardice in the SEAL Teams. Philipps details not simply the many failures of leadership within SEAL ranks that enabled war crimes, jeopardized the mission, and risked the lives of service members, but also the culture that made accountability almost impossible. Superb.”—Phil Klay, National Book Award–winning author of Missionaries and Redeployment

“An enthralling, blow-by-blow account of the 2019 court-martial of U.S. Navy SEAL platoon chief Eddie Gallagher for stabbing a wounded ISIS prisoner to death . . . [Philipps] recounts the shocking events . . . in riveting detail. This is the definitive portrait of a saga that exposed deep fault lines within an elite fighting force.”—Publishers Weekly (starred review)