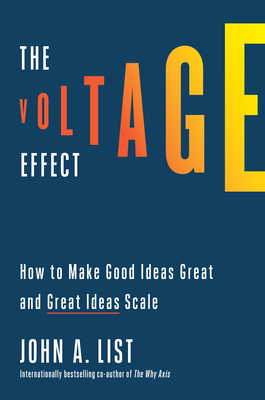 
Usually Ships in 1-5 Days
NATIONAL BESTSELLER • A leading economist answers one of today’s trickiest questions: Why do some great ideas make it big while others fail to take off?

“Brilliant, practical, and grounded in the very latest research, this is by far the best book I’ve ever read on the how and why of scaling.”—Angela Duckworth, CEO of Character Lab and New York Times bestselling author of Grit

ONE OF THE MOST ANTICIPATED BOOKS OF 2022—Men’s Journal

“Scale” has become a favored buzzword in the startup world. But scale isn't just about accumulating more users or capturing more market share. It's about whether an idea that takes hold in a small group can do the same in a much larger one—whether you’re growing a small business, rolling out a diversity and inclusion program, or delivering billions of doses of a vaccine.

Translating an idea into widespread impact, says University of Chicago economist John A. List, depends on one thing only: whether it can achieve “high voltage”—the ability to be replicated at scale.

In The Voltage Effect, List explains that scalable ideas share a common set of attributes, while any number of attributes can doom an unscalable idea. Drawing on his original research, as well as fascinating examples from the realms of business, policymaking, education, and public health, he identifies five measurable vital signs that a scalable idea must possess, and offers proven strategies for avoiding voltage drops and engineering voltage gains. You’ll learn:

•  How celebrity chef Jamie Oliver expanded his restaurant empire by focusing on scalable “ingredients” (until it collapsed because talent doesn’t scale)
•  Why the failure to detect false positives early on caused the Reagan-era drug-prevention program to backfire at scale
•  How governments could deliver more services to more citizens if they focused on the last dollar spent
•  How one education center leveraged positive spillovers to narrow the achievement gap across the entire community
•  Why the right set of incentives, applied at scale, can boost voter turnout, increase clean energy use, encourage patients to consistently take their prescribed medication, and more.

By understanding the science of scaling, we can drive change in our schools, workplaces, communities, and society at large. Because a better world can only be built at scale.
John A. List is the Kenneth C. Griffin Distinguished Service Professor in Economics at the University of Chicago. He has served on the Council of Economic Advisers and is the recipient of numerous awards and honors including the Kenneth Galbraith Award. His work has been featured in The New York Times, The Economist, Harvard Business Review, Fortune, NPR, Slate, NBC, Bloomberg, and The Washington Post. List has authored over 250 peer-reviewed journal articles, several academic books, and, with Uri Gneezy, the international bestseller The Why Axis.
“List is far too thoughtful to write something gimmicky or simple. . . . An entertaining and clear writer. His book is chock-full of compelling stories of businesses that failed and others that went big.”—The Wall Street Journal

“Skillfully done . . . Careful, comprehensive, and fun, The Voltage Effect excels in turning a seemingly boring niche topic into a fascinating book that’s relevant to all, from CEOs and policymakers to naturally curious people with a taste for learning how economics shapes our lives in the real world.”—ZME Science

“If you’ve ever wondered why so many promising solutions fail to achieve their desired impact, look no further. . . . A master class in how the quirks of human irrationality can make or break our ideas in the real world.”—Steven D. Levitt, professor of economics, University of Chicago, and co-author of Freakonomics

“Brilliant, practical, and grounded in the very latest research, this is by far the best book I’ve ever read on the how and why of scaling. If you care about changing the world, or just want to make better decisions in your own life, The Voltage Effect is for you.”—Angela Duckworth, CEO of Character Lab and New York Times bestselling author of Grit

“How many books are funny and wise, practical and profound? John List is a scientist, but he’s also a magician, and he’s changing the world. The Voltage Effect shows how. This is one of the best economics books I have ever read—and an instant classic in behavioral economics.”—Cass R. Sunstein, Robert Walmsley University Professor, Harvard University, and New York Times bestselling co-author of Nudge

“The Voltage Effect is the tool kit for the ambitious. Packed with proven principles and pro tips made real through behind-the-scenes stories in settings ranging from Silicon Valley to African NGOs, it fills the gap between startup books and management books to show how any idea can achieve its full potential.”—Scott Cook, co-founder of Intuit

“A must-read . . . Ideas from the ivory tower or Davos fail often—and fail badly—because they do not recognize the deeply political and historical nature of the problems they are meant to deal with or the social realities in which these problems are embedded. This thought-provoking and engaging book proposes an original framework for thinking about how good policy proposals can be applied at a scale large enough to do social good, and for avoiding predictable mistakes that prevent such scaling.”—Daron Acemoglu, professor at MIT and co-author of Why Nations Fail and The Narrow Corridor