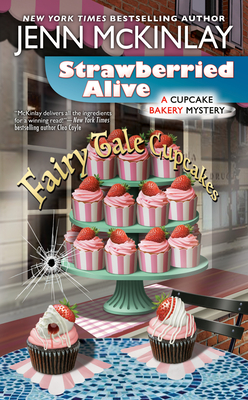 This is book number 14 in the Cupcake Bakery Mystery series.

Life is smooth as buttercream at the Fairy Tale Cupcakes bakery, and newlyweds Mel and Joe are stopping to smell the flours. But things start to crumble one night when an unknown gunman takes a shot at Mel. Though the bullets miss their mark, the cupcake crew goes on high alert to figure out who would want to kill a small-town baker, and why.

When more business owners are attacked, things turn fatal, and locals begin to wonder if the killer could be one of their own. Every shop owner in town starts to fear it’s only a matter of time before they too become victims of the mystery murderer. Despite the cupcake crew's superb baking skills, it will be anything but a piece of cake to catch the killer, as they try to prevent anyone else from being berried.
Jenn McKinlay is the award-winning New York Times, USA Today, and Publishers Weekly bestselling author of several mystery and romance series. Her work has been translated into multiple languages in countries all over the world. She lives in sunny Arizona in a house that is overrun with kids, pets, and her husband's guitars.
“Readers who love baking-themed cozies will relish this entry in the popular series.”
—Booklist

Praise for the Cupcake Bakery Mysteries

“Quirky, cupcake-fueled characters add to the joy of this long-running…series.”
—Kirkus

"All the ingredients for a winning read."
—Cleo Coyle, New York Times bestselling author of the Coffeehouse Mysteries