Loathe to Love You (Paperback) 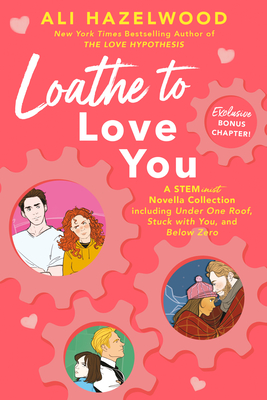 Loathe to Love You (Paperback)

From the New York Times bestselling author of The Love Hypothesis comes a collection of steamy, STEMinist novellas featuring a trio of engineers and their loves in loathing—with a special bonus chapter!

Under One Roof
An environmental engineer discovers that scientists should never cohabitate when she finds herself stuck with the roommate from hell—a detestable big-oil lawyer who won’t leave the thermostat alone.

Stuck with You
A civil engineer and her nemesis take their rivalry—and love—to the next level when they get stuck in a New York elevator.

Below Zero
A NASA aerospace engineer's frozen heart melts as she lies injured and stranded at a remote Arctic research station and the only person willing to undertake the dangerous rescue mission is her longtime rival.
Ali Hazelwood is the New York Times bestselling author of The Love Hypothesis, as well as a writer of peer-reviewed articles about brain science, in which no one makes out and the ever after is not always happy. Originally from Italy, she lived in Germany and Japan before moving to the US to pursue a PhD in neuroscience. She recently became a professor, which absolutely terrifies her. When Ali is not at work, she can be found running, eating cake pops, or watching sci-fi movies with her two feline overlords (and her slightly-less-feline husband).
Praise for Ali Hazelwood

“Hazelwood proves that she is the perfect writer to show that science is sexy as hell.”—#1 New York Times bestselling author Jodi Picoult

“Gloriously nerdy and sexy, with on-point commentary about women in STEM.”—New York Times bestselling author Helen Hoang on Love on the Brain

“STEMinists, assemble. Your world is about to be rocked.”—New York Times bestselling author Elena Armas on Love on the Brain