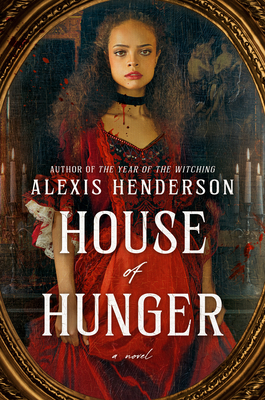 
Usually Ships in 1-5 Days
WANTED - Bloodmaid of exceptional taste. Must have a keen proclivity for life’s finer pleasures. Girls of weak will need not apply.

A young woman is drawn into the upper echelons of a society where blood is power in this dark and enthralling Gothic novel from the author of The Year of the Witching.

Marion Shaw has been raised in the slums, where want and deprivation are all she know. Despite longing to leave the city and its miseries, she has no real hope of escape until the day she spots a peculiar listing in the newspaper seeking a bloodmaid.

Though she knows little about the far north—where wealthy nobles live in luxury and drink the blood of those in their service—Marion applies to the position. In a matter of days, she finds herself the newest bloodmaid at the notorious House of Hunger. There, Marion is swept into a world of dark debauchery. At the center of it all is Countess Lisavet.

The countess, who presides over this hedonistic court, is loved and feared in equal measure. She takes a special interest in Marion. Lisavet is magnetic, and Marion is eager to please her new mistress. But when she discovers that the ancient walls of the House of Hunger hide even older secrets, Marion is thrust into a vicious game of cat and mouse. She’ll need to learn the rules of her new home—and fast—or its halls will soon become her grave.
Alexis Henderson is the author of the Goodreads Choice Awards Finalist, The Year of the Witching, and the forthcoming House of Hunger. When she's not writing, you'll find her tending to an assortment of houseplants or nursing a hot cup of tea.
“House of Hunger is gorgeous and lushly dark, a nightmare vision that will pull you into its terrifying grip. Alexis Henderson is a master at creating enthralling fear.” -Simone St. James, New York Times bestselling author of The Book of Cold Cases

“The kind of book that deserves to be devoured. Deliciously brutal, hypnotic, and brimming with ravenous malice, Alexis Henderson has crafted a bloody, sapphic fever dream of a novel and I can’t wait to read it again.”– Francesca May, International Bestselling Author of Wild and Wicked Things

"A gory gem of a story that sinks in its teeth and won’t let up, House of Hunger proves that Alexis Henderson is one of the best Gothic writers out there."–Hannah Whitten, New York Times bestselling author of For the Wolf

"With decadent prose as bewitching and as dangerously sharp as a rare gemstone that could slice you open at any moment, Alexis Henderson's House of Hunger is a Gothic masterpiece that demands to linger like the coppery scent of blood in the air long after the final page is turned."-Eric LaRocca, author of Things Have Gotten Worse Since We Last Spoke

"Readers will devour every page of House of Hunger. Alexis Henderson delivers a chilling, atmospheric tale shrouded in mystery, indulgence, deceit, and dangerous consequences."-N.E. Davenport, author of The Blood Trials

“Breathlessly paced and dripping with gothic decadence, Henderson’s second novel (after The Year of the Witching) cements her status as one of horror’s best new voices.” - Publishers Weekly (starred review)

“With sumptuous prose and decadent, Gothic atmosphere, Alexis Henderson spins a lush tale of depravity, sensuality, and horror that kept me on my toes until the bitter end.”-Isabel Cañas, author of The Hacienda