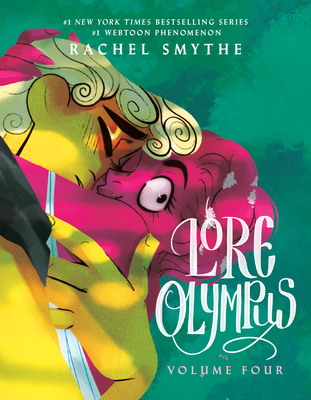 This is book number 4 in the Lore Olympus series.

Witness what the gods do after dark in the fourth volume of a stylish and contemporary reimagining of one of the best-known stories in Greek mythology, featuring a brand-new, exclusive short story from creator Rachel Smythe.

The rumor mill of Olympus is constantly churning, but Persephone and Hades are all anyone can talk about. With the constant gossip creating intense pressure on the pair, they decide to slow down their budding romance and focus on sorting out their own issues first.

But that’s easier said than done.

Hades struggles to find support in his personal life, with Zeus trivializing his feelings and Minthe resorting to abusive patterns in their relationship. And while Hades tries to create healthier boundaries where he can—like finally putting a stop to his sporadic, revenge-fueled hookups with Hera—he still feels lonely and adrift.

Persephone feels equally ostracized as her classmates shun her for her connection to Hades, and she can find no refuge at home, with Apollo constantly dropping by unannounced and pushing his unwelcome advances. And on top of it all, the wrathful god of war, Ares, has returned to Olympus to dredge up his sordid history with the goddess of spring, threatening to surface Persephone’s dark and mysterious past and ruin her tenuous position in the land of the gods.

Despite agreeing to take it slow, Persephone and Hades find themselves inextricably drawn toward each other once more amid the chaos. The pull of fate cannot be denied.

This volume collects episodes 76–102 of the #1 WEBTOON comic Lore Olympus.
Rachel Smythe is the creator of the Eisner-winning Lore Olympus, published via Webtoon.
“If eyes could eat, [Lore Olympus] would be a feast. Smythe’s artistic style features bright washes of color and bold, suggestive lines. . . . It’s paced as a soap opera, all drawn-out tensions and long-simmering secrets, and I, for one, am thrilled to be along for the ride.”—New York Times Book Review

“It’s easy to see why the internet has fallen in love with Lore Olympus. This dazzling interpretation of the classic Greek myths is as charming as it is provocative, and as witty as it is startlingly romantic. Prepare to be swept away!”—Marissa Meyer, #1 New York Times bestselling author of The Lunar Chronicles

“This is a refreshingly modern and surprisingly poignant take on the Hades and Persephone myth. Not only does Rachel Smythe’s talent as an illustrator shine in Lore Olympus but also her skill with weaving a steamy, often laugh-out-loud funny, and emotional retelling.”—Jennifer L. Armentrout, #1 New York Times bestselling author of From Blood and Ash

“With vivid, irresistible art and storytelling that would make even the Muses swoon, this modern myth deftly tackles the darkness of the ancient stories while never losing its brilliant light. I couldn’t devour it fast enough.”—Alexandra Bracken, #1 New York Times bestselling author of Lore

“Lore Olympus is a visual feast! It’s sexy and clever, taking ancient Greek myths and spinning them to be relevant today. I could not put this graphic novel down and cannot wait to see more of Persephone and Hades—and the rest of the Lore Olympus pantheon.”—P. C. Cast, New York Times bestselling author of Spells Trouble and the House of Night series

“An inspired, sweet, and thoroughly modern reimagining of Hades and Persephone’s tale. Its cast is memorable, and its central relationship absorbing and spellbinding.”—Aliette de Bodard, award-winning author of Fireheart Tiger

“Rachel Smythe’s Lore Olympus is a stunning reimagining of classical myth. Smythe adapts the story of Persephone and Hades, removing it from its dark origins and building a brand-new epic with her own complex and beautiful characters. The rest of the gods, nymphs, and creatures of Smythe’s world are the icing on top.”—Liv Albert, author of Greek Mythology: The Gods, Goddesses, and Heroes Handbook and creator of Let’s Talk About Myths, Baby! podcast

“A sweepingly romantic story that offers new meaning with each and every rereading, Rachel Smythe’s Lore Olympus perfectly balances humor and tragedy, heartbreak and desire. Fans who enjoyed it as a webcomic will be thrilled to hold this luscious work of art in their hands.”—Jo Rochelle, creator of Girl Wonder podcast

“Lore Olympus is an addictive, romantic gem of a comic, filled with complex, lovable (and hateable) characters. The artwork is rich and dramatic, with gorgeous colors and bold linework, each panel a dreamy treat for the eyes. I can't wait to continue reading Hades and Persephone’s story.”—Faith Erin Hicks, Eisner Award winner and New York Times bestselling cartoonist

“Lore Olympus is the perfect escape. Rachel Smythe’s artwork is vivid and enchanting, with deeply relatable characters and a deft handling of their dark pasts. For anyone looking for a fresh take on Hades and Persephone, Lore Olympus brings us a sexy and delightful romp that captivates until the very last page. Whimsical and heartfelt!”—Ashley Poston, author of the national bestseller Geekerella

“Lore Olympus is a delicacy. Funny, dark, sexy, and lavishly illustrated, it delights on every page. I can’t recommend it enough.”—Kate Leth, author of Marvel’s Patsy Walker, A.K.A. Hellcat!

“Moody, beautiful, and funny . . . Be transported to a gorgeous reimagining of Greek gods in a modern fantasy setting. Romance, drama, trauma, and goofs! You will not be able to put this down once you start!”—Babs Tarr, professional comic artist

“Romantic, radical, and relatable, goddesses have never been more gloriously grounded. A must-read for any girls figuring out their own power.”—Sam Maggs, co-creator of Tell No Tales: Pirates of the Southern Seas

“The tale of Hades and Persephone is one of the most recognizable in all of Greek mythology but in Smythe’s hands, against a sleek modern backdrop, it is made new again. In this reimagining we get a Persephone with agency and nuance, and a Hades with a conscience. The storytelling is immersive, the characters are engaging, and the art is exquisite. I loved every single frame!”—Kalynn Bayron, bestselling author of Cinderella Is Dead

“Lore Olympus is my favorite graphic novel—ever. I have read and reread this brilliantly crafted work of art and cannot get enough of this story. Even though the legend of Hades and Persephone is thousands of years old, you will fall in love with these characters in a whole new way—and you’ll never see the twists and turns coming!”—Beth Revis, New York Times bestselling author of Across the Universe

“Rachel Smythe’s Lore Olympus is an addicting, swoony delight. This clever take on a timeless tale is destined to become a modern classic.”—Adrienne Young, New York Times bestselling author of Fable and Namesake

“Sensitive and elegant . . . Beautiful artwork and compelling characters [take] the forefront of this romantic, tech-savvy retelling of Greek mythology.”—Booklist