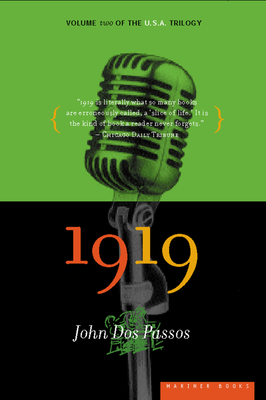 This is book number 2 in the U.S.A. Trilogy series.

With 1919, the second volume of his U.S.A. trilogy, John Dos Passos continues his "vigorous and sweeping panorama of twentieth-century America" (Forum), lauded on publication of the first volume not only for its scope, but also for its groundbreaking style.

Again, employing a host of experimental devices that would inspire a whole new generation of writers to follow, Dos Passos captures the many textures, flavors, and background noises of modern life with a cinematic touch and unparalleled nerve.

1919 opens to find America and the world at war, and Dos Passos's characters, many of whom we met in the first volume, are thrown into the snarl. We follow the daughter of a Chicago minister, a wide-eyed Texas girl, a young poet, a radical Jew, and we glimpse Woodrow Wilson, Theodore Roosevelt, and the Unknown Soldier. 1919 provides an incomparable portrait of America from the turn of the century to the Depression of 1929.

John Dos Passos (1896-1970), a member of the Lost Generation, was the author of more than forty works of fiction and nonfiction, including THREE SOLDIERS and MANHATTAN TRANSFER.

"The single greatest novel any of us have written, yes, in this country in the last one hundred years." -- Norman Mailer —