Unbroken and Unbowed: A History of Black Protest in America (Paperback) 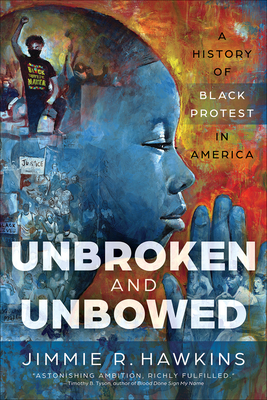 Unbroken and Unbowed: A History of Black Protest in America (Paperback)

In this compelling and informative volume, Jimmie R. Hawkins walks the reader through the many forms of Black protest in American history, from pre-colonial times though the George Floyd protests of 2020. Hawkins breaks American history into five sections, with subsections highlighting how Black identity helped to shape protest during that period. These protests include slave ship mutinies, the abolitionist movement, the different approaches to protest from Frederick Douglas, W. E. B. Dubois, and Booker T. Washington, protest led by various Black institutions, Black Lives Matter movements, and protests of today's Black athletes, musicians, and intellectuals, such as Lebron James, Beyonce, and Kendrick Lamar. Hawkins also covers the backlash to these protests, including the Jim Crow era, the Red Summer of 1919, and modern-day wars on the Black community in the form of the War on Drugs and voter suppression.