Down These Mean Streets (Paperback) 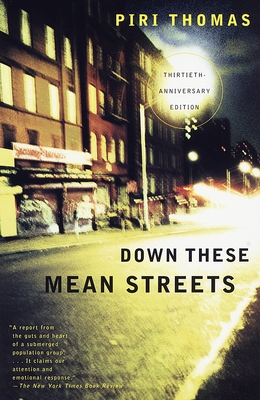 Down These Mean Streets (Paperback)


Backordered
A modern classic of manhood, marginalization, survival, and transcendence—and a lyrical memoir of coming of age on the streets of Spanish Harlem.

"A report from the guts and heart of a submerged population group ... It claims our attention and emotional response." —The New York Times Book Review

Thirty years ago Piri Thomas made literary history with this lacerating memoir. Here was the testament of a born outsider: a Puerto Rican in English-speaking America; a dark-skinned morenito in a family that refused to acknowledge its African blood. Here was an unsparing document of Thomas's plunge into the deadly consolations of drugs, street fighting, and armed robbery—a descent that ended when the twenty-two-year-old Piri was sent to prison for shooting a cop.

As he recounts the journey that took him from adolescence in El Barrio to a lock-up in Sing Sing to the freedom that comes of self-acceptance, faith, and inner confidence, Piri Thomas gives us a book that is as exultant as it is harrowing and whose every page bears the irrepressible rhythm of its author's voice.
PIRI THOMAS was born of Puerto Rican and Cuban parents in New York City's Spanish Harlem in 1928. Poverty in the ghetto led him to drugs, youth gangs, and a series of criminal activities, for which he served seven years in prison. There he began his life of rehabilitation, vowing to use his street and prison experience to turn youths away from lives of crime. Mr. Thomas then lectured at schools and universities across the country, and authored several books including Savior, Savior, Hold My Hand; Seven Long Times; and Stories from El Barrio. He died in 2011, at the age of 83.
"Piri Thomas describes the passionate, painful search to validate his manhood...He has done it all in Harlem's mean streets and gone on from machismo to manhood, acquiring during the journey an understanding of man."--The Nation