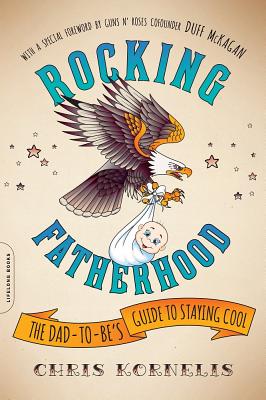 
Usually Ships in 1-5 Days
Let me guess: your Facebook page is littered with baby studies and you're hearing "Having a baby changes everything" more often than "Having a baby is pure joy." The sad fact is that pregnancy has been turned into a cataclysmic medical emergency and parenthood's become an obstacle course of optimization.

Music journalist Chris Kornelis has no patience for any of it. He didn't know the first thing about pregnancy when his wife gave him the good news, but he knew that the birth of a child should be a joyous occasion, not a minefield of stress and shame.

Rocking Fatherhood provides a week-by-week guide to pregnancy for twenty-first century fathers, but unlike most pregnancy books, it doesn't address every scenario and statistic you and your lady could encounter in the next nine months. Rather, Chris encourages you to make decisions based on what you think is best for your family, not to conform to someone else's definition of ideal. To write the book, he mined his own time as an expectant pop and new dad, but he also solicited wisdom from doctors, scientists, songwriters, and the real rock stars' moms. His entertaining insights include:

You don't need a book or birthing course (only a 3x5 card.
Babies can't change everything. They can't even change themselves.
Pregnancy sex can be great sex.
Nobody else knows how they're going to make it work, either.
Bottle or breast: you decide what's best.
Chris Kornelis is a regular contributor to the Wall Street Journal, and has written for Maxim, the Village Voice and many other publications. He recently collaborated with Duff McKagan on his memoir, How to Be A Man (and Other Illusions), the follow-up to his bestselling memoir, It's So Easy (And Other Lies). Kornelis lives with his wife and their two kids near Seattle, Washington.

Illustrator Aaron Bagley is a freelance illustrator and cartoonist. Aaron did all the inside illustrations for Kurt Reighley's United States of Americana (Harper, 2010) and has worked with many publications, including Seattle Weekly and The Stranger. He can routinely be seen drawing comics about cats. He resides in Seattle with his wife and newborn son.
Praise for Rocking Fatherhood

Parents, 6/1/16
“[Rocking Fatherhood] is down-to-earth and full of supportive advice about the transition to family life.”

Associated Press, 6/1/16
"Rocking Fatherhood takes a cheeky week-by-week approach that might just soothe some new daddy nerves and help out in the empathy, sympathy, gotta-buy-some-gear departments.”

RelevantDad.com, 6/16/16
“Rocking Fatherhood is the must-read book of the year for expectant fathers.”