The Disappearance of Trudy Solomon (A Ford Family Mystery #1) (Hardcover) 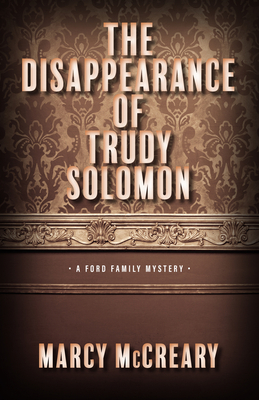 The Disappearance of Trudy Solomon (A Ford Family Mystery #1) (Hardcover)

This is book number 1 in the A Ford Family Mystery series.

In a family like that, you won’t need enemies.

In the waning days of the Catskills hotel era, Stanley and Rachel Roth, the owners of the Cuttman Hotel, were practically dynasty—third generation proprietors of a sprawling resort with a grand reputation. The glamorous and gregarious matriarch, Rachel. The cunning and successful businessman, Stan. Four beautiful children. A perfect family deserving of respect and loyalty. Or so it seemed.

Fast forward forty years. The Roths have lost their clout. When skeletal remains are found on the side of the road, the disappearance of Trudy Solomon, a coffee shop waitress at the Cuttman in 1978, is reopened. Each member of the Roth family holds a clue to the case, but getting them to admit what they know will force Detective Susan Ford to face a family she’d hoped never to see again.

Marcy McCreary worked for several years as a marketing and sales executive at various magazine publishing companies and content marketing agencies before turning to fiction writing. She is the author of The Disappearance of Trudy Solomon (CamCat Books). With two daughters and two step-daughters living in four different cities (Brooklyn, Nashville, Madison, Seattle), she spends a lot of time on airplanes crisscrossing the country. She lives in the beautiful coastal towns of Hull, MA and Nantucket, MA with her husband and black lab.

"An enticing series launch... [with] more than one twist [that] will catch the reader by surprise." -Publishers Weekly

"This debut forces a police detective to question her own actions in a situation ripped from the headlines, while also juggling a cold case. Readers looking for an up-to-date police procedural will be satisfied with Susan Ford's investigations." -Library Journal