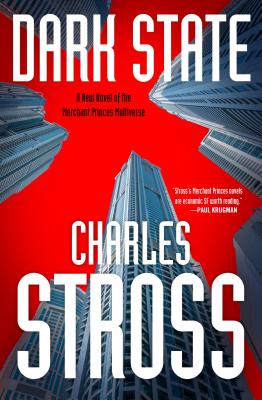 This is book number 2 in the Empire Games series.

Dark State ups the ante on the already volatile situations laid out in the sleek techno-thriller Empire Games, the start to Stross' new story-line, and perfect entry point for new readers, in The Merchant Princes series.

In the near-future, the collision of two nuclear superpowers across timelines, one in the midst of a technological revolution and the other a hyper-police state, is imminent. In Commissioner Miriam Burgeson’s timeline, her top level agents run a high risk extraction of a major political player. Meanwhile, a sleeper cell activated in Rita's, the Commissioner's adopted daughter and newly-minted spy, timeline threatens to unravel everything.

With a penchant for intricate world-building and an uncanny ability to realize alternate history and technological speculation, Stross' writing will captivate any reader who's a fan hi-tech thrillers, inter-dimensional political intrigue, and espionage.

CHARLES STROSS (he/him) is a full-time science fiction writer and resident of Edinburgh, Scotland. He has won three Hugo Awards for Best Novella, including for the Laundry Files tale “Equoid.” His work has been translated into over twelve languages. His novels include the bestselling Merchant Princes series, the Laundry series (including Locus Award finalist The Dilirium Brief), and several stand-alones including Glasshouse, Accelerando, and Saturn's Children.

Like many writers, Stross has had a variety of careers, occupations, and job-shaped catastrophes, from pharmacist (he quit after the second police stakeout) to first code monkey on the team of a successful dot-com startup (with brilliant timing, he tried to change employers just as the bubble burst) to technical writer and prolific journalist covering the IT industry. Along the way he collected degrees in pharmacy and computer science, making him the world’s first officially qualified cyberpunk writer.

"A nightmarish clash of arms, politics, and wills... Tension crackles from every page.... Sheer brilliance: when Stross is in this mood, nobody else comes close." —Kirkus, starred review, on Dark State

"No one beats [Stross] at hypertech." —The Wall Street Journal on Empire Games

"A well-written book, full of mystery and intrigue, with entire worlds at stake." —Michael Flynn on Empire Games

Praise for The Merchant Princes series

“A festival of ideas in action, fast moving and often very funny.” —Locus

"A rollicking, pacy read that delivers on the fun." —Interzone