Heaven, an Unexpected Journey: One Man's Experience with Heaven, Angels, and the Afterlife (Paperback) 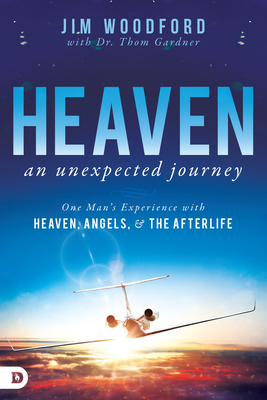 Heaven, an Unexpected Journey: One Man's Experience with Heaven, Angels, and the Afterlife (Paperback)

Encounter the glories of Heaven, the terrors of hell, and the stunning reality of the unseen world

When Jim Woodford died, he spent eleven hours in Heaven. When he came back, he was changed forever.

A successful airline pilot and businessman, Jim had it all--a loving family, substantial wealth, and all of the good things that come with it. But none of this was enough to satisfy the emptiness he felt in his heart. He always hungered for something more. And then one day, he died.

Jim was never a religious man. When it came to matters of God and faith, he was ambivalent. But as he lay in the hospital bed, clinically dead for more than 11 hours, his consciousness was transported to the wonders of Heaven and the horrors of hell. When he returned to this world, he brought back the missing piece his soul had been longing for.

Join Jim Woodford on this unforgettable journey into the afterlife

Whether you need hope for tomorrow or strength for today, this story is your invitation to a radical transformation

Thom Gardner has ministered as a Bible teacher or pastor since 1986, and is now President of Restored Life Ministries, Inc., a ministry dedicated to holistic spiritual formation. He travels internationally to equip leaders throughout the body of Christ by leading retreats and training seminars using his techniques of interactive encounter of the presence of Christ through the Scriptures. He has authored several books including Healing the Wounded Heart, Relentless Love, Living the God-Breathed Life, The Healing Journey, and Everything that Grows.Jim Woodford was born in Newfoundland, Canada. Losing his father when he was two-years-old, Jim grew up in the home of his maternal grandparents. Jim developed a fascination with aircraft at an early age as there was a seaplane dock at the edge of the river where the family lived. Jim became one of the youngest licensed pilots in Canada with a flying career that began at age 19. Jim flew small aircraft to the remote lakes in the provinces as other routes were generally not available especially in the rugged winters. He gradually worked his way up to fly larger aircraft until he became captain of a major airline. Having flown from Toronto to Timbuktu, Jim was well traveled. Jim also has a love for horses and now resides in New Brunswick, Canada with his wife Lorraine and several horses. Jim travels in Northern America encouraging the body of Christ with his account of his experience in Heaven and also has been a comfort to families of those who have lost loved ones assuring them of the glories of Heaven and the love of God in Jesus Christ.