The Orphan Girl: A WWII Novel of Courage Found and a Promise Kept (Paperback) 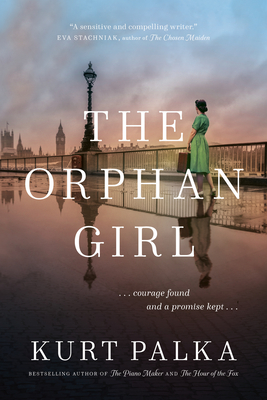 The Orphan Girl: A WWII Novel of Courage Found and a Promise Kept (Paperback)


Usually Ships in 1-5 Days
For fans of Kristin Harmel and Martha Hall Kelly's Lilac Girls -- the bestselling author of The Piano Maker returns with a vivid, atmospheric, and deeply moving novel set during the final months of the Second World War.

London, 1944/45: Kate Henderson is an energetic and spirited young woman. As a trained paramedic and ambulance driver she does her work courageously and with determination, even though underneath she is still wrestling with grief after witnessing the shooting death of her diplomat father seven years earlier. Her father’s murder was never properly investigated and it remains unsolved.

Kate’s life is interrupted once more when she wakes up one night to the sound of the air raid alarm and the terror whistles of a bomb’s stabilizers screaming toward the roof of her house. Kate survives, but she is injured.

Her house is gone as well, and after her time in the hospital, Claire Giroux, a kind doctor and family friend, invites Kate to live with her as she recuperates. This arrangement works well for them until a few months later when Claire’s husband comes home from the war. Within days the lives of both women are drastically altered, and events are set in motion, both in England and in Canada, that challenge Kate and Claire to their limits.

The Orphan Girl is a moving and powerful story about friendship and courage, and about promises made and kept.
The Orphan Girl is KURT PALKA’s eighth novel, following the bestsellers The Piano Maker and The Hour of the Fox. His previous book, Clara (Patient Number 7, in hardcover) was shortlisted for the Hammett Prize. His work has been translated into eight languages. He lives near Toronto.

Praise for Kurt Palka and The Hour of the Fox
“Elegantly-written and utterly compelling from start to finish, this is an exquisite outing.” —Toronto Star

Praise for Kurt Palka and The Piano Maker
NATIONAL BESTSELLER

“Deeply engrossing and unforgettable . . . will leave readers shouting ‘bravo’ for the resiliency of the human spirit.” —Publishers Weekly

“Beautifully crafted, suspenseful, and rich in the historical detail Palka’s readers know and love him for, this is the perfect book to get snowed in with.” —Toronto Star

“The Piano Maker traces a woman's journey from loss to redemption. Kurt Palka is a sensitive and compelling writer.” —Eva Stachniak, author of The Chosen Maiden

“A writer of immense control, compassion, and a soaring imagination, Kurt Palka possesses a profound understanding of the human spirit.” —Linda Holeman, author of The Devil On Her Tongue

“A treat to be savoured. The prose is clear and understated, the atmosphere of small town Nova Scotia beautifully captured. . . . The writing sparkles with suspense as the tale unfurls and the past sneaks up behind Helene Giroux.” —Roberta Rich, author of The Midwife of Venice

“The novel, spare, taut, and written in an engaging style reminiscent of such bestsellers as Tracy Chevalier's Girl with the Pearl Earring and The House I Loved by Tatiana de Rosnay, The Piano Maker is an unexpected treat.” —London Free Press