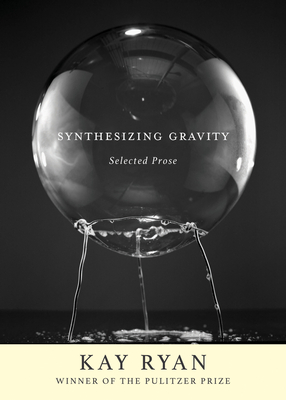 The first-ever collection of essays by one of our most distinguished and distinctive poets, Pulitzer Prize-winner and former Poet Laureate of the United States, Kay Ryan

Synthesizing Gravity gathers for the first time a thirty-year selection of Kay Ryan's probings into aesthetics, poetics, and the mind in pursuit of art.

A bracing collection of critical prose, book reviews, and her private previously unpublished soundings of poems and poets-- including Robert Frost, Stevie Smith, Marianne Moore, William Bronk, and Emily Dickinson-- Synthesizing Gravity bristles with Ryan's crisp wit, her keen off-kilter insights, and her appetite and appreciation for the genuine. Among essays like "Radiantly Indefensible," "Notes on the Danger of Notebooks," and "The Abrasion of Loneliness," are piquant pieces on the virtues of emptiness, forgetfulness, and other under-loved concepts. Edited and with an introduction by Christian Wiman, this generous collection of Ryan's distinctive thinking gives us a surprising look into the mind of an American master.

Kay Ryan is a lifetime Californian whose honors include the Pulitzer Prize and the National Humanities Medal awarded by President Obama. She served two terms as U.S. Poet Laureate and is a former MacArthur Fellow.