Know Own Change: Journeying Toward God's Heart for Reconciliation (Paperback) 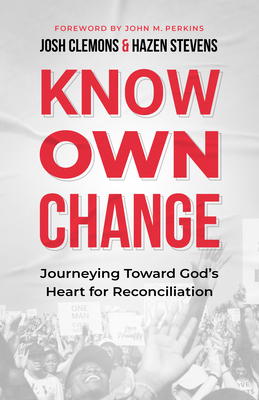 Know Own Change: Journeying Toward God's Heart for Reconciliation (Paperback)

When it comes to racial reconciliation, we often ask, “Where do we go from here?” But has it ever occurred to you that the real question is “Why are we still here?” In other words, until we’ve seen the problem of racism correctly—its history, its current effects, and its root causes—we aren’t equipped to head in the right direction. We’ll just keep falling into the same old patterns. The blind will lead the blind, and no one will have the vision to foster real change.

But take hope! Restoring our spiritual sight is exactly what Jesus came to achieve.

In this book, Josh Clemons and Hazen Stevens—one white, one black, and both brothers in Christ—will invite you to start the journey toward racial reconciliation and justice. Join us as we:

In Know. Own. Change., the authors set aside the world’s patterns of division and hate. Instead, they set a tone that emerges from spiritual kinship in Christ. Every page seeks to honor Him, pointing believers back to Jesus as the one who is reconciling all things to himself.

JOSH CLEMONS resides in Atlanta, GA along with his wife Lakisha and sons Langston Grant and Duke Ellington. He has built a reputation as a lover of God, builder of people, and a reconciler of cultures. Leading a racial reconciliation movement and serving as a professor, Josh shares his brilliance, wisdom, and practical instruction impacting audiences in both religious and secular communities. He is privileged to serve as the Executive Director for OneRace Movement, and is pursuing his Ph.D. at Fuller Theological Seminary.

HAZEN STEVENS is one of the original leaders and vice chairman of OneRace Movement, an organization focused on gospel-centered racial reconciliation and biblical justice. Since the movement's inception in 2016, OneRace has been addressing the racial divide in the church and society through four key pillars: mobilizing catalytic prayer, building authentic relationships, equipping disciples, and partnering for justice. He has a passion for prayer and missions and for thirteen years has served on staff with a 24/7 house of prayer and as domestic director of a pioneer missions organization. He currently serves as the Executive Pastor of GateCity Church. He is married to his best friend Hannah and they reside with their four delightful children (Amarin 8, Chesed 5, Pearl 4, and Elisha 3) in metro-Atlanta.