The Patriarch: A Mystery of the French Countryside (Bruno, Chief of Police Series #8) (Paperback) 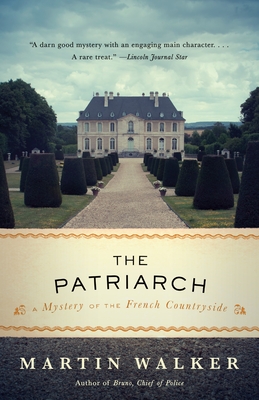 The Patriarch: A Mystery of the French Countryside (Bruno, Chief of Police Series #8) (Paperback)

This is book number 8 in the Bruno, Chief of Police Series series.

Another delightful installment in the delightful, internationally acclaimed series featuring Chief of Police Bruno: Bruno Courrèges is thrilled when he receives an invitation to the lavish birthday celebration of his childhood hero, World War II flying ace Marco “the Patriarch” Desaix. But when the party ends in the death of one of Marco’s longtime friends, Gilbert, it turns into another day on the job for St. Denis's chief of police.

All signs point to a tragic accident, but Bruno isn’t so sure, for there is more to the Desaix family's lives and loyalties than meets the eye. There’s Victor, the Patriarch’s son and Gilbert's sometimes rival, and Victor’s seductive wife, Madeleine, whose roving eye intrigues Bruno even more than her fierce political ambitions. Not to mention the Patriarch himself—did his postwar Soviet ties intersect too closely with Gilbert’s career in Cold War intelligence?

As Bruno’s entanglement with the Desaix family becomes more complicated, his inquiries into Gilbert’s life will become a deadly threat to his own.
MARTIN WALKER is a senior fellow of the Global Business Policy Council, a private think tank based in Washington, D.C. He is also editor in chief emeritus and international affairs columnist at United Press International. His previous novels in the Bruno series are Black Diamond; Bruno, Chief of Police; The Children Return; The Crowded Grave; The Dark Vineyard; The Devil’s Cave; and The Resistance Man, all international best sellers. He lives in Washington, D.C., and the Dordogne.

“The delights of [Walker’s Dordogne]—from the chateaus along the rivers to the prehistoric cave paintings to the food on the tables—are very real. . . . Absorbing.” —The New York Times Book Review

“A satisfying and surprisingly intimate tour through a modern French village, full of character and charm. . . . The Patriarch in many ways is comparable to vintage wine, a cuvee of disparate tastes, aromas, depths and colors . . . Santé. Drink up." —The Arizona Republic

“Sure to appeal to readers with a palate for mysteries with social nuance and understated charm.” —The Wall Street Journal

“In Martin Walker’s delightful series . . . the charm of rural France is regularly disrupted—but not too much.” —The Seattle Times

“Martin Walker’s Bruno novels are as delicious as the world class meals his chief of police whips up and as intoxicating as the wines he serves.” —Open Letters Monthly

“[Will] delight readers who relish a skillful blend of complex international political nuance and pastoral intrigue mixed with a soupçon of fine French wine and cuisine.” —Publishers Weekly

“As pleasant as a nice brunch.” —The Washington Independent Review of Books