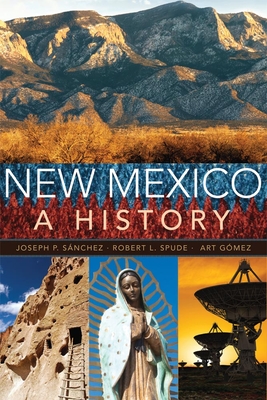 
Usually Ships in 1-5 Days
Since the earliest days of Spanish exploration and settlement, New Mexico has been known for lying off the beaten track. But this new history reminds readers that the world has been beating paths to New Mexico for hundreds of years, via the Camino Real, the Santa Fe Trail, several railroads, Route 66, the interstate highway system, and now the Internet. This first complete history of New Mexico in more than thirty years begins with the prehistoric cultures of the earliest inhabitants. The authors then trace the state's growth from the arrival of Spanish explorers and colonizers in the sixteenth century to the centennial of statehood in 2012. Most historians have made the territory's admission to the Union in 1912 as the starting point for the state's modernization. As this book shows, however, the transformation from frontier province to modern state began with World War II. The technological advancements of the Atomic Era, spawned during wartime, propelled New Mexico to the forefront of scientific research and pointed it toward the twenty-first century. The authors discuss the state's historical and cultural geography, the economics of mining and ranching, irrigation's crucial role in agriculture, and the impact of Native political activism and tribe-owned gambling casinos. New Mexico: A History will be a vital source for anyone seeking to understand the complex interactions of the indigenous inhabitants, Spanish settlers, immigrants, and their descendants who have created New Mexico and who shape its future.