Buried Dreams: The Hoosac Tunnel and the Demise of the Railroad Age (Hardcover) 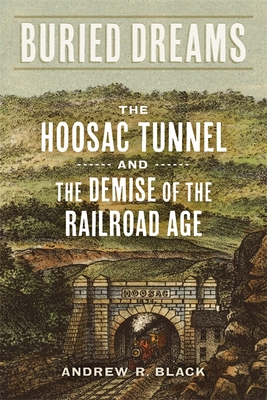 Buried Dreams: The Hoosac Tunnel and the Demise of the Railroad Age (Hardcover)

The Hoosac railroad tunnel in the mountains of northwestern Massachusetts was a nineteenth-century engineering and construction marvel, on par with the Brooklyn Bridge, Transcontinental Railroad, and Erie Canal. The longest tunnel in the Western Hemisphere at the time (4.75 miles), it took nearly twenty-five years (1851‒1875), almost two hundred casualties, and tens of millions of dollars to build. Yet it failed to deliver on its grandiose promise of economic renewal for the commonwealth, and thus is little known today. Andrew R. Black's Buried Dreams refreshes public memory of the project, explaining how a plan of such magnitude and cost came to be in the first place, what forces sustained its completion, and the factors that inhibited its success.

Black digs into the special case of Massachusetts, a state disadvantaged by nature and forced repeatedly to reinvent itself to succeed economically. The Hoosac Tunnel was just one of the state's efforts in this cycle of decline and rejuvenation, though certainly the strangest. Black also explores the intense rivalry among Eastern Seaboard states for the spoils of western expansion in the post‒Erie Canal period. His study interweaves the lure of the West, the competition between Massachusetts and archrival New York, the railroad boom and collapse, and the shifting ground of state and national politics. The psychic makeup of Americans before and after the Civil War heavily influenced public perceptions of the tunnel; by the time it was finished, Black contends, the indomitable triumphalism that had given birth to the Hoosac had faded to skepticism and cynicism. Anticipated economic benefits never arrived, and Massachusetts eventually sold the tunnel for only a fraction of its cost to a private railroad company. Buried Dreams tells a story of America's reckoning with the perils of impractical idealism, the limits of technology to bend nature to its will, and grand endeavors untempered by humility.
Andrew R. Black has a PhD in history from Boston University. He is also the author of John Pendleton Kennedy: Early American Novelist, Whig Statesman, and Ardent Nationalist.