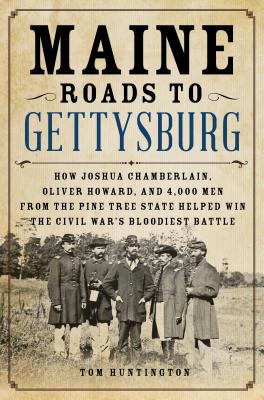 
Usually Ships in 1-5 Days
Everyone knows about Joshua Lawrence Chamberlain and his 20th Maine Regiment, but there's much more to the story of Maine at the Battle of Gettysburg. Soldiers from Maine made their presence felt all over the battlefield during three days of fighting in July 1863. There's Oliver Otis Howard, corps commander who helped secure high ground for the Union on the first day. There's Adelbert Ames, who drilled the 20th Maine--including Chamberlain himself--into a fighting regiment and then commanded a brigade at Gettysburg. The 17th Maine fought ably in the confused and bloody fighting in the Wheatfield on the second day, the 19th Maine helped defeat Pickett's Charge, and of course Chamberlain's men made their legendary stand at Little Round Top.
Tom Huntington is the author of Searching for George Gordon Meade: The Forgotten Victor of Gettysburg, as well as Guide to Gettysburg Battlefield Monuments, Pennsylvania Civil War Trails, and Ben Franklin's Philadelphia. He is also the former editor of American History and Historic Traveler magazines, and his writing has appeared in many publications, including Smithsonian, Air & Space, American Heritage, British Heritage, and Yankee. He was born and bred in Augusta, Maine, but now lives in Camp Hill, Pennsylvania, not far from Gettysburg.