Black Walden: Slavery and Its Aftermath in Concord, Massachusetts (Paperback) 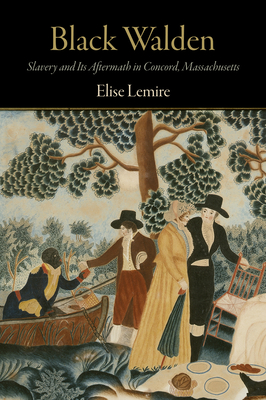 Black Walden: Slavery and Its Aftermath in Concord, Massachusetts (Paperback)

Concord, Massachusetts, has long been heralded as the birthplace of American liberty and American letters. It was here that the first military engagement of the Revolutionary War was fought and here that Thoreau came to live deliberately on the shores of Walden Pond. Between the Revolution and the settlement of the little cabin with the bean rows, however, Walden Woods was home to several generations of freed slaves and their children. Living on the fringes of society, they attempted to pursue lives of freedom, promised by the rhetoric of the Revolution, and yet withheld by the practice of racism. Thoreau was all but alone in his attempt to conjure up the former occupants of these woods. Other than the chapter he devoted to them in Walden, the history of slavery in Concord has been all but forgotten.

In Black Walden: Slavery and Its Aftermath in Concord, Massachusetts, Elise Lemire brings to life the former slaves of Walden Woods and the men and women who held them in bondage during the eighteenth century. After charting the rise of Concord slaveholder John Cuming, Black Walden follows the struggles of Cuming's slave, Brister, as he attempts to build a life for himself after thirty-five years of enslavement. Brister Freeman, as he came to call himself, and other of the town's slaves were able to leverage the political tensions that fueled the American Revolution and force their owners into relinquishing them. Once emancipated, however, the former slaves were permitted to squat on only the most remote and infertile places. Walden Woods was one of them. Here, Freeman and his neighbors farmed, spun linen, made baskets, told fortunes, and otherwise tried to survive in spite of poverty and harassment. With a new preface that reflects on community developments since the hardcover's publication, Black Walden reminds us that this was a black space before it was an internationally known green space and preserves the legacy of the people who strove against all odds to overcome slavery and segregation.
Elise Lemire is the author of Miscegenation: Making Race in America, also available from the University of Pennsylvania Press. She is Professor of Literature at Purchase College, State University of New York.