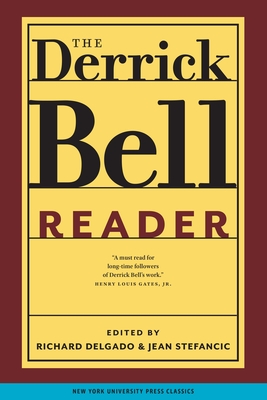 This is book number 75 in the Critical America series.

Lawyer, activist, teacher, writer: for over 40 years, Derrick Bell provoked his critics and challenged his readers with uncompromising candor and progressive views on race and class in America. A founder of Critical Race Theory and pioneer of the use of allegorical stories as tools of analysis, Bell's groundbreaking work shattered conventional legal orthodoxies and turned comfortable majoritarian myths inside out. Edited and with an extensive introduction by leading critical race theorists Richard Delgado and Jean Stefancic, The Derrick Bell Reader reflects the tremendous breadth of issues that Bell grappled with over his phenomenal career, including affirmative action, Black nationalism, legal education and ethics. Together, these selections offer the most complete collection of Derrick Bell's writing available today.
Richard Delgado (Editor) Richard Delgado is John J. Sparkman Chair of Law at the University of Alabama and one of the founders of critical race theory. His books include The Latino/a Condition: A Critical Reader (coedited with Jean Stefancic; NYU Press) and The Rodrigo Chronicles. Jean Stefancic (Editor) Jean Stefancic is Professor and Clement Research Affiliate at the University of Alabama School of Law. Her books include No Mercy: How Conservative Think Tanks and Foundations Changed America's Social Agenda. She and Delgado edited Critical Race Theory: The Cutting Edge.