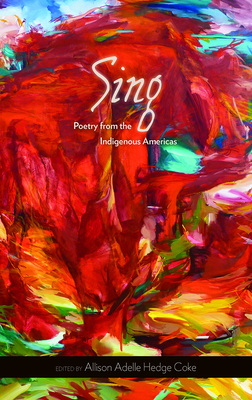 They write from disparate zones and parallel experience, from lands of mounded earthwork long-since paved, from lands of ancient ball courts and the first great cities on the continents, from places of cold, from places of volcanic loam, from zones of erased history and ongoing armed conflict, where “postcolonial” is not an academic concept but a lived reality. As befits a volume of such geographical inclusivity, many poems here appear in multiple languages, translated by fellow poets and writers like Juan Felipe Herrera and Cristina Eisenberg.

Hedge Coke’s thematic organization of the poems gives them an added resonance and continuity, and readers will appreciate the story of the genesis of this project related in Hedge Coke’s deeply felt introduction, which details her experiences as an invited performer at several international poetry festivals. Sing is a journey compelled by the exploration of kinship and the desire for songs that open “pathways of return.”
Allison Adelle Hedge Coke currently holds the Reynolds Chair at the University of Nebraska, Kearney. She is the American Book Award winning author of several volumes of poetry and creative nonfiction, including Blood Run, a volume leading the pathway to preserving a traditional sacred site, Off-Season City Pipe, a cultural labor edition, and Rock, Ghost, Willow, Deer, a landscape and cultural ethos memoir. Her edited literary collections include Effigies: An Anthology of New Indigenous Writing, Pacific Rim, 2009.
“Many of the poems in this ambitious collection remind us why we read poetry at all—to be returned to the elemental, to relish the beauty of repetition and variation, and to hear the cries of singular voices, here marginalized because of their native culture but also because of the daring announcement of their individuality.”—Billy Collins

“This dynamic and useful anthology not only is groundbreaking, but also forces those in poetic circles of power to rethink what poetry is about, how we are influenced by what is published and what is not, and how the true meaning of poetry comes from taking powerful artistic action to ensure that the road of poetry in our lives takes a new turn.”—Bloomsbury Review

“In what can only be called a historical anthology of indigenous poets from the Americas, Allison Hedge Coke has given us a stunning gift that is splendid because of the brilliance of the individual and eclectic poems collected, but richer for the coherent collective song that the anthology represents. This is a big fat book of endless pleasures that helps us to re-imagine America!”—Kwame Dawes, editor of Prairie Schooner

“This collection is an entrance into that part of ‘America’ without which there no real America and not even a real United States. It is a bravura collection, a long-needed Anthology ‘of those antediluvian descendants of the Western hemisphere.’”—Amiri Baraka

“Hedge Coke worked to illuminate the important work of poets of diverse backgrounds and heritage.”—Poetry from the Plains

“Allison Hedge Coke has assembled a multilingual feast of songs, bringing together established and emerging indigenous poets in South, Central, and North America. With poems presented in their original languages, this anthology is a groundbreaking collection.”—Arthur Sze, author of The Ginkgo Light

“What a diverse feast of poetry! Indigenous poets from Peru, Venezuela, Columbia, Ecuador, Guatemala, Mexico and Canada as well as the United States serve up delicious unforgettable poems. A good number of the poems are composed in indigenous languages which make this collection especially valuable.”—Leslie Marmon Silko