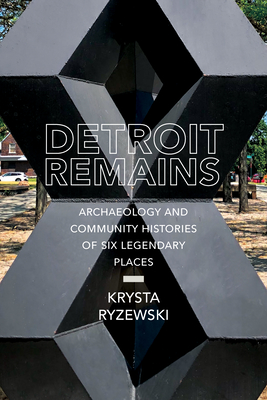 An archaeologically grounded history of six legendary places in Detroit

The city of Detroit has endured periods of unprecedented industrial growth, decline, and revitalization between the late nineteenth century and the present. In Detroit Remains: Archaeology and Community Histories of Six Legendary Places, Krysta Ryzewski presents six archaeological case studies of legendary Detroit institutions—Little Harry speakeasy, the Ransom Gillis house, the Blue Bird Inn, Gordon Park, the Grande Ballroom, and the Halleck Street log cabin—that trace the contours of the city’s underrepresented communities and their relationship to local currents of capitalism and social justice. Through a combination of rigorous historical archaeological research and narrative storytelling, Ryzewski deftly contextualizes the cases within the city’s current struggles, including recovery from bankruptcy, and future-oriented recovery efforts.

This is the first historical archaeology book focused on Detroit and one of the few to foreground the archaeology of the Great Migration era (ca. 1915–1970). The archaeological scholarship is rooted in collaborative, community-involved, and public-facing initiatives. The case studies examine how power is and has been exercised in Detroit’s communities over the past century: how it was stripped from the city’s twentieth- and twenty-first-century residents, but also how they acquired alternative sources of agency by establishing creative and illicit economies, most of which still operated within the city’s capitalist framework.

Throughout this book, connections run deep between archaeology, heritage, politics, historic preservation, and storytelling. Detroit Remains demonstrates how the city’s past, present, and future lie not in ruins but in the tangible archaeological traces of the everyday lives of Detroiters and their legacies.

Krysta Ryzewski is associate professor of anthropology at Wayne State University. She is coauthor of An Archaeological History of Montserrat in the West Indies and coeditor of Contemporary Archaeology and the City: Creativity, Ruination, and Political Action.

“In this timely book, Ryzewski carefully and sensitively presents the story of one of America’s most iconic and culturally significant cities, using six special places as points of entry. Ryzewski reveals that Detroit, though much maligned by outsiders, has a glorious and infinitely complex history, one that rewards archaeologists with rich stories and essential lessons. Every urban archaeologist and historian should digest this required reading, ponder its profound significance, and emulate it.”
—Charles E. Orser Jr., author of Historical Archaeology

“Detroit Remains provides an interesting example of contemporary archaeology that is rooted in community partnerships and local place-based heritage, which in Detroit’s case are often heritage narratives that resist the city’s own urban development fantasies.”
—Paul Mullins, author of Revolting Things: The Archaeology of Shameful Things and Repulsive Realities

“Detroit Remains is a compelling example of the future of archaeology that ranges between past and present, engaging written, oral, and material sources in telling the stories of a living Detroit. Set in a city that at times seems dystopian, Ryzewski and her collaborators confront the lives of those who have been both the victims and benefactors of industrial capitalism’s boom and bust cycles to say nothing of systemic racism. Through such noteworthy addresses as the Blue Bird Inn, Little Harry speakeasy, Gordon Park, and Grande Ballroom, the reader is given a tour of an urban landscape replete with memories that refuse to be silenced. To even conceive of a ‘jazz archaeology’ is worthy enough, but to do so as part of a much richer story that only archaeology can tell is to see the discipline’s future squarely in focus. Truly a joy to read.”
—Stephen A. Mrozowski, author of The Archaeology of Class in Urban America

“Detroit Remains is a book that Detroit deserves and archaeology needs. The book effectively demonstrates that even sites from the relatively recent past can be uniquely and significantly understood through the inherent interdisciplinarity of Historical Archaeology.”
—Jane Eva Baxter, author of The Archaeology of American Childhood and Adolescence