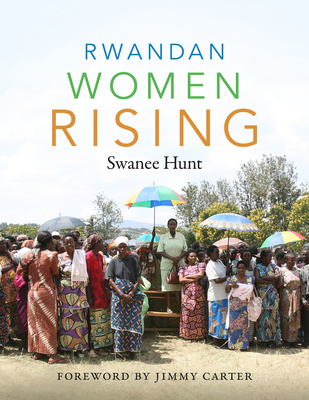 
Backordered
In the spring of 1994, the tiny African nation of Rwanda was ripped apart by a genocide that left nearly a million dead. Neighbors attacked neighbors. Family members turned against their own. After the violence subsided, Rwanda's women--drawn by the necessity of protecting their families--carved out unlikely new roles for themselves as visionary pioneers creating stability and reconciliation in genocide's wake. Today, 64 percent of the seats in Rwanda's elected house of Parliament are held by women, a number unrivaled by any other nation.
While news of the Rwandan genocide reached all corners of the globe, the nation's recovery and the key role of women are less well known. In Rwandan Women Rising, Swanee Hunt shares the stories of some seventy women--heralded activists and unsung heroes alike--who overcame unfathomable brutality, unrecoverable loss, and unending challenges to rebuild Rwandan society. Hunt, who has worked with women leaders in sixty countries for over two decades, points out that Rwandan women did not seek the limelight or set out to build a movement; rather, they organized around common problems such as health care, housing, and poverty to serve the greater good. Their victories were usually in groups and wide ranging, addressing issues such as rape, equality in marriage, female entrepreneurship, reproductive rights, education for girls, and mental health.
These women's accomplishments provide important lessons for policy makers and activists who are working toward equality elsewhere in Africa and other postconflict societies. Their stories, told in their own words via interviews woven throughout the book, demonstrate that the best way to reduce suffering and to prevent and end conflicts is to elevate the status of women throughout the world.
Swanee Hunt chairs the Washington-based Institute for Inclusive Security. During her tenure as U.S. ambassador to Austria (1993-97), she hosted negotiations and symposia focused on securing peace in the neighboring Balkan states. She is the Eleanor Roosevelt Lecturer in Public Policy at Harvard University's John F. Kennedy School of Government, CEO of Hunt Alternatives, and a member of the U.S. Council on Foreign Relations. She has appeared on CNN, MSNBC, Fox News, and NPR and written for Foreign Affairs, Foreign Policy, the International Herald Tribune, Chicago Tribune, Los Angeles Times, and Boston Globe, among other publications. She is the author of Worlds Apart: Bosnian Lessons for Global Security, Half-Life of a Zealot, and This Was Not Our War: Bosnian Women Reclaiming the Peace, all also published by Duke University Press. Jimmy Carter was the thirty-ninth president of the United States. A Nobel Prize laureate and author of numerous books, President Carter is the founder of The Carter Center, which has worked for decades to resolve conflict, promote democracy, protect human rights, and prevent disease around the globe.