Holiday: The Best Travel Magazine that Ever Was (Hardcover) 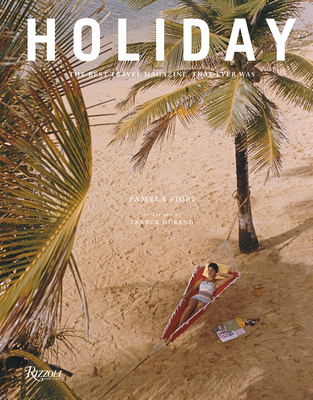 Holiday: The Best Travel Magazine that Ever Was (Hardcover)


Usually Ships in 1-5 Days
The first book on magazine sensation Holiday, which between 1946 and 1977 was one of the most exciting publications in the world. Renowned for its bold layouts, literary credibility, and ambitious choice of photographers and artists, Holiday portrayed the romance of travel like no other periodical.

At Holiday magazine's peak, urbane editor, Ted Patrick, and visionary art director, Frank Zachary, invited postwar America to see and read about the world. On the journey, readers joined the magazine's renowned roster of talent. Some of the most celebrated writing by Jack Kerouac, Ernest Hemingway, Graham Greene, Joan Didion, Truman Capote, Colette, and E. B. White (his piece "Here Is New York" was commissioned for Holiday in 1949) first appeared in its pages. Henri Cartier-Bresson documented a breathtaking Paris and other cities; Slim Aarons captured the glamour of travel around the world; and Al Hirschfeld and Ludwig Bemelmans contributed showstopping illustrations of places and personages.

Pamela Fiori writes about the magazine's history, giving it context during the era of the jet age, world turbulence, and the rise of Madison Avenue advertising. Holiday was a vibrant original, inspiring travel magazines that followed and leaving glorious photography and art as well as thought-provoking journalism in its wake.
Pamela Fiori, who began her renowned publishing career at Holiday magazine in 1968, was editor in chief of Travel + Leisure and Town & Country. Since retirement from Hearst, Fiori has authored and contributed to numerous books on travel and social history.
Franck Durand is the founder and creative director of Paris-based Atelier Franck Durand, a creative design studio specializing in fashion, beauty, and lifestyle. In 2014, Durand relaunched Holiday magazine.