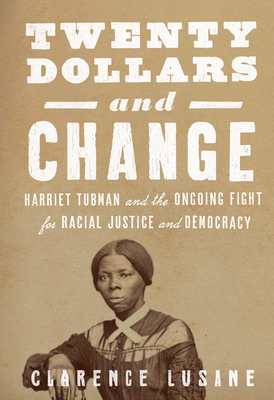 Twenty Dollars and Change places Harriet Tubman's life and legacy in a long tradition of resistance, illuminating the ongoing struggle to realize a democracy in which her emancipatory vision prevails.

America is in the throes of a historic reckoning with racism, with the battle for control over official narratives at ground zero. Across the country, politicians, city councils, and school boards are engaged in a highly polarized debate about whose accomplishments should be recognized, and whose point of view should be included in the telling of America's history.

In Twenty Dollars and Change, historian Clarence Lusane, author of the acclaimed Black History of the White House, writes from a basic premise: Racist historical narratives and pervasive social inequities are inextricably linked--changing one can transform the other. Taking up the debate over the future of the twenty-dollar bill, Lusane uses the question of Harriet Tubman vs. Andrew Jackson as a lens through which to view the current state of our nation's ongoing reckoning with the legacies of slavery and foundational white supremacy. He places the struggle to confront unjust social conditions in direct connection with the push to transform our public symbols, making it plain that any choice of whose life deserves to be remembered and honored is a direct reflection of whose basic rights are deemed worthy of protection, and whose are not.

Dr. Clarence Lusane is an author, activist, scholar, and journalist. He is a Professor and former Chairman of Howard University's Department of Political Science. Lusane earned his B.A. in Communications from Wayne State University and both his Masters and Ph.D. from Howard University in Political Science. He's been a political consultant to the Congressional Black Caucus Foundation and a former Commissioner for the DC Commission on African American Affairs. He frequently appears on MSNBC and CSPAN, and was invited by the Obama's to speak at the White House. Author of many books, including The Black History of the White House, Lusane lives and works in the Washington, DC area.Kali Holloway is a monthly columnist for both The Nation and The Daily Beast. She is the former director of the "Make it Right Project," a national initiative dedicated to taking down Confederate monuments and telling the truth about history. She is lead vocalist for the band "Easy Lover" and is currently working on her first book, The Secret Racist History of Everything.