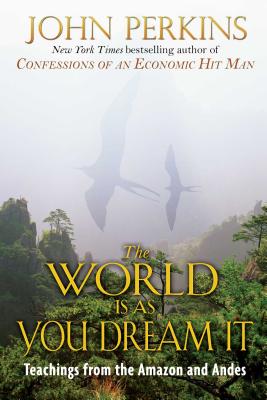 The New York Times bestseller Confessions of an Economic Hit Man documents John Perkins’ extraordinary career as a globe-trotting economic hit man. Perkins’ insider’s view leads him to crisis of conscience--to the realization that he must devote himself to work which will foster a world-wide awareness of the sanctity of indigenous peoples, their cultures, and their environments. Perkins’ books demonstrate how the age-old shamanic techniques of some of the world’s most primitive peoples have sparked a revolution in modern concepts about healing, the subconscious, and the powers each of us has to alter individual and communal reality.

Deep in the rain forests and high in the Andes of Ecuador, native shamans teach the age-old technique of dream change, a tradition that has kept the cultures of the Otavalans, Salasacans, and Shuar alive despite centuries of conquest. Now these shamans are turning their wisdom and power to the problem of curing a new kind of illness--that created by the industrial world’s dream of dominating and exploiting nature.

John Perkins tells the story of these remarkable shamans and of the U.S. medical doctors, psychologists, and scientists who have gone with him to learn the techniques of dream change. These shamanic teachings have sparked a revolution in modern concepts about healing, the subconscious, and the powers each of us has to alter individual and communal reality.
John Perkins has traveled and worked with South American indigenous peoples since 1968. He currently arranges expeditions into the Amazon and has developed the POLE (Pollution Offset Lease on Earth) program with the Shuar and Achuar peoples as a means of preserving their culture against the onslaught of modern civilization. He is also the author of The Stress-Free Habit, Psychonavigation, Shapeshifting, and The World Is As You Dream It.
"A thrilling view of ancient native cultures that make their homes within the rain forest . . . vividly written."
— Booklist

"A magnificent book! It has a place of honor in my personal library. Perkins' The World Is As You Dream It is a masterly and understanding exploration of shamanic inner thinking. It is thought-provokingly written, a most valuable contribution."
— Richard Evans Schultes, Ph.D., Harvard Jeffrey Professor of Biology, Director of Harvard Botanical M

"The World Is As You Dream It is one of those rare books that tells a riveting story at the same time as it provides deep insights into what makes us who we are and the world what it is. I was so riveted to this book that I couldn't put it down for a second until I finished reading it."
— Cynthia S. Larson, Realityshifters.com

"Environmentalist, teacher, and activist Perkins established Earth Dream Alliance to preserve indigenous people, their environment, and their shamanic traditions. This book is a fascinating account of how he and others, through contacts with cultures such as that of the Otavalans, Salasacans, and Shuar, concluded "that in order for life to continue as we know it, we must all change our dream from the one of materialism and domination.. . to a more spiritual, cooperative, and Earth-honoring one." He recounts shamanic journeys to encourage the reader's self-empowerment, so that knowledge long buried by Western culture may be rediscovered. Recommended for large public and academic libraries, especially those with New Age and anthropological collections."
— Library Journal (Sunday , May 01, 1994)

“The dream not only drives the action, it also guides the action. Through John Perkins’s narrative we learn this truth as it is taught with special vividness by the indigenous people of South America.”
— Thomas Berry, author of The Dream of the Earth and coauthor of The Universe Story