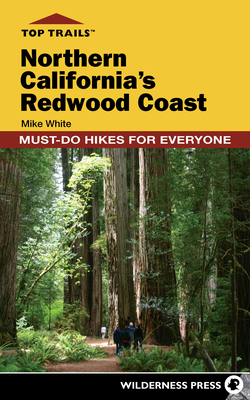 
Backordered
At last there is a definitive guidebook for the magnificent and beautifully mysterious hikers' paradise known as the Redwood Coast of Northern California. In this new title in the Top Trails series, veteran outdoors author Mike White leads day-trippers and backpackers into some of the most awe-inspiring terrain on earth. Step-by-step in his trail-worn boots, the author created a menu of 57 diverse routes, from a gentle half-mile morning loop to a 29-mile backpacking adventure. Winding through Mendocino, Humboldt, and Del Norte counties, he guides readers into this landscape of lush, old-growth redwoods; picture-postcard vistas to Pacific Ocean sea stacks; winding descents to undisturbed beaches and mesmerizing tide-pool life; pathways to inland canyons; and untamed wilderness shy on humans but boisterous with herds of Roosevelt elk. For readers ready to hit the trail, this is the can't-do-without guide and for armchair travelers, it's 57 journeys into wonderland.

Mike White grew up in Portland, OR, where his adventures in the Cascade Range spawned his interest in the outdoors. He became a full-time writer, eventually writing or contributing to numerous outdoor guides. A featured speaker for outdoors and conservation organizations, he lives in Reno, NV.