All That Still Matters at All (Paperback) 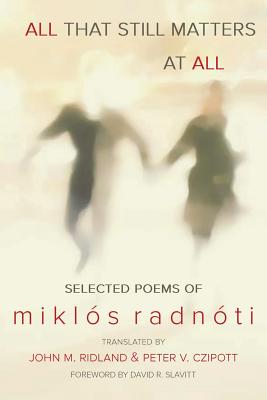 All That Still Matters at All (Paperback)


Usually Ships in 1-5 Days
Mikl's Radn ti (1909-1944), whose work beautifully combines colloquial modernism with Virgilian classicism, is best known internationally as one of the great poets of the Holocaust: his final, harrowing poems were recovered from a notebook found on his body upon exhumation from a mass grave in 1946. But while he is certainly one of the key literary chroniclers of the Holocaust, he is also much more than that. All That Still Matters at All spans his entire output, from his carefree early love lyrics to the increasingly urgent poems written as the clouds of fascism and war descended upon Europe to the poems composed during forced labor and the death march that finally took his life. All of his work, however, was inspired by his wife, muse and literary executor, Fanni Gyarmati Radn ti, who enthusiastically endorsed these new translations by Ridland and Czipott prior to her death in 2014 at the age of 101.