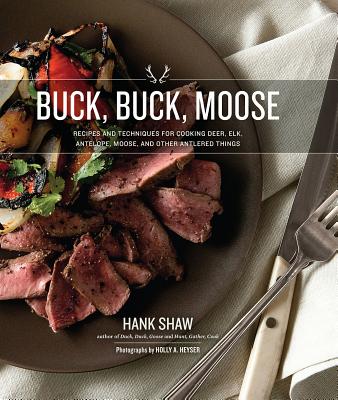 This is not your father's venison cookbook. Buck, Buck, Moose is the first comprehensive, lushly photographed, full-color guide to working with and cooking all forms of venison, including deer, elk, moose, antelope and caribou. Buck, Buck, Moose will take you around the world, from nose to tail. The book features more than 100 recipes ranging from traditional dishes from six continents to original recipes never before seen.

You'll also get thorough instructions on how to butcher, age and store your venison, as well as how to use virtually every part of the animal. Buck, Buck, Moose also includes a lengthy section on curing venison and sausage-making. Peppered throughout are stories of the hunt and essays on why venison holds such a special place in human society. Venison is far more than mere food. It is, in many ways, what made us human.

Hank Shaw is a chef, hunter, angler, forager and wild foods expert constantly on the lookout for new things to catch and eat. Shaw stands at the forefront of the wild foods movement, and his website Hunter Angler Gardener Cook (www.honest-food.net) is the internet's largest source of tips, techniques and recipes for wild foods. From venison to waterfowl and upland game birds, to saltwater and freshwater fish, seafood, and edible wild plants and mushrooms, food you can't buy in the store are Shaw's specialty. Hunter Angler Gardener Cook won the James Beard Award for Best Blog in 2013; the Beards are considered the Oscars of the food world. Shaw also won the International Association of Culinary Professionals award for Best Blog in 2010 and 2011, and his work was featured in the book Best Food Writing 2012 and 2013. His second book, Duck, Duck, Goose, won Best Book in the Outdoor Writers Association of America's 2013 Excellence in Craft Awards.