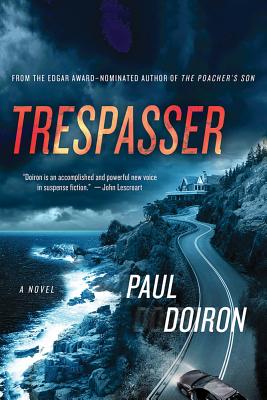 This is book number 2 in the Mike Bowditch Mysteries series.

“Maine Game Warden Mike Bowditch is back on the job, following his introduction in Doiron's debut The Poacher's Son, and once again he's tripping over bodies. He is called to the scene of an accident in which a car hit a deer, but when he arrives neither the deer nor the driver are there. He is convinced by a state patrolman to leave the matter to the state police, but the situation continues to haunt Bowditch. Where would a young woman go on a cold, snowy Maine night? Devastated when the truth is revealed, Bowditch risks all to finally bring a killer to justice. Doiron is an author to watch!”
— Vicki Erwin, Main Street Books, St.Charles, MO

In Paul Doiron's riveting follow-up to his Edgar Award–nominated novel, The Poacher's Son, Maine game warden Mike Bowditch's quest to find a missing woman leads him through a forest of lies in search of a killer who may have gotten away with murder once before.

While on patrol one foggy March evening, Bowditch receives a call for help. A woman has reportedly struck a deer on a lonely coast road. When the game warden arrives on the scene, he finds blood in the road—but both the driver and the deer have vanished. And the state trooper assigned to the accident appears strangely unconcerned.

The details of the disappearance seem eerily familiar. Seven years earlier, a jury convicted lobsterman Erland Jefferts of the rape and murder of a wealthy college student and sentenced him to life in prison. For all but his most fanatical defenders, justice was served. But when the missing woman is found brutalized in a manner that suggests Jefferts may have been framed, Bowditch receives an ominous warning from state prosecutors to stop asking questions.

For Bowditch, whose own life was recently shattered by a horrific act of violence, doing nothing is not an option. His clandestine investigation reopens old wounds between Maine locals and rich summer residents and puts both his own life and that of the woman he loves in jeopardy. As he closes in on his quarry, he suddenly discovers how dangerous his opponents are, and how far they will go to prevent him from bringing a killer to justice.

“Doiron's plot is heart-pounding, filled with startling twists and turns. The main characters, some lovable and others despicable, are all multidimensional. And the stylish prose is pitch-perfect, especially in its evocative descriptions of the beauty, and occasionally the ugliness, of coastal Maine in early spring. The story's slam-bang ending leaves Mike's life in tatters, and the reader anxious to know what the author has in store for him next.” —Associated Press

“Doiron delivers another perfectly plotted mystery peopled with multidimensional characters, but, in addition, his writing has matured. His descriptions of Maine's midcoast are incredibly evocative of the sights, sounds, and smells of early spring, and the heart-pounding account of Mike's fourwheeling chase through the woods is a masterpiece of high-octane narrative. Suggest this series to fans of C. J. Box and Nevada Barr.” —Booklist (starred review)

“Doiron serves up a tense thriller that stars a memorable main character and brings the rugged Maine landscape vividly to life. Highly recommended for lovers of mysteries, particularly those set outdoors or in New England. Fans of C.J. Box and Castle Freeman will not be disappointed.” —Library Journal (starred review)

“Doiron's second thriller featuring Mike Bowditch makes effective use of Maine's ‘mud season,' that time when the weather is unpredictable and new life struggles to emerge from the snow, as a metaphor for Mike's internal struggle to put his life back on track. Doiron's sense of place, and of the people of Maine, adds lush nuance to this suspense-filled read. Well-paced, with an interesting array of elegantly rounded characters, this effort more than lives up to the promise of Doiron's debut.” —RT Book Review (Top Pick, 4 ½ stars)

“Engaging . . . Doiron is clearly a talented storyteller. . . . The book is hard to put down.” —Portland Press Herald

“Doiron is an author to watch!” —Indiebound