Don't Ever Get Old: A Mystery (Buck Schatz Series #1) (Paperback) 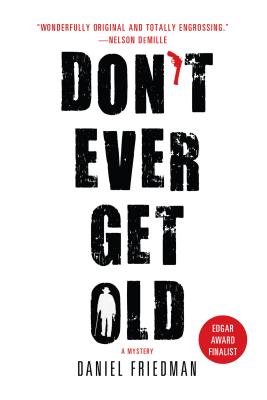 Don't Ever Get Old: A Mystery (Buck Schatz Series #1) (Paperback)

This is book number 1 in the Buck Schatz Series series.

When Buck Schatz, senior citizen and retired Memphis cop, learns that an old adversary may have escaped Germany with a fortune in stolen gold, Buck decides to hunt down the fugitive and claim the loot. But a lot of people want a piece of the stolen treasure, and Buck's investigation quickly attracts unfriendly attention from a very motley (and murderous) crew in Daniel Friedman's Don't Ever Get Old, nominated for an Edgar Award for Best First Novel.

“Once you start reading this wonderfully original and totally engrossing story, you'll do what I did: keep reading . . . When I'm 87, I want to be Buck Schatz.” —Nelson DeMille

“Getting old isn't fun, but reading about Buck coping with it and a slew of dirty deeds -- and possibly fatal adversaries--is.” —Associated Press

“It's a pitch-perfect debut novel, expertly balancing comedy, gritty crime drama, absurdity, and genuine poignancy. It's also one of the most assured debuts in some time... Highly recommended” —Mystery Scene

“Friedman's debut novel is one of the most original and entertaining tales I have read in many a moon...Don't Ever Get Old is just about as good as debut mysteries get.” —Bruce Tierney, Bookpage

“Buck transcends masculinity in favor of manliness... If you don't like this book, there's something wrong with you.” —Douglas Lord, "Books For Dudes" columnist for Library Journal

“Daniel Friedman is the Jewish Elmore Leonard. Friedman is a master storyteller who can speed your heart up and stop it on a dime.” —Andrew Shaffer, EvilReads.com

“Laugh-out-loud funny as well as surprisingly poignant. Kudos to Daniel Friedman for giving us a nearly ninety-year-old hero who's not going gently into that good night--he's going out with guns blazing, F-bombs flying and a pack of Lucky Strikes.” —Lisa Brackmann, author of Rock Paper Tiger

“We have nothing to fear from aging, if Don't Ever Get Old is any measure. By turns gritty and snappy, Friedman's clever debut novel is like an epilogue to 'Inglorious Basterds,' sixty-six years later.” —Alma Katsu, author of The Taker

“If you read one book this year about the adventures of an eighty-eight-year-old Jewish retired cop and his frat-boy grandson, it had better be Daniel Friedman's Don't Ever Get Old. Friedman creates a colorful cast of oddball characters and sends them on a quest to recover a stash of Nazi gold. The result is a twisty, funny, fast-paced treat.” —Harry Dolan, author of Bad Things Happen

“In this crackling debut, Dan Friedman paints a pitch-perfect portrait of crusty, gun-toting, octogenarian Jewish ex-cop Baruch "Buck" Schatz as he searches for Nazi gold. Funny, suspenseful, and poignant, Don't Ever Get Old will stick with you long after you've turned the last page. If you love a great story well-told, put Friedman high on your list of "must reads.” —Alan Orloff, Agatha Award-nominated author of Killer Routine