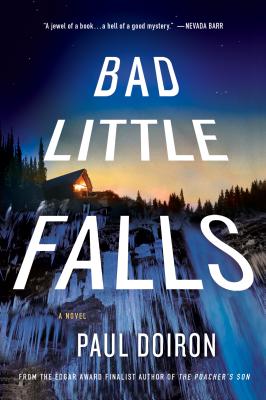 This is book number 3 in the Mike Bowditch Mysteries series.

Anthony- and Edgar-award nominated author Paul Doiron delivers another "masterpiece of high-octane narrative" (Booklist) with Bad Little Falls, his newest harrowing thriller about the hunt for a murderer at the height of a major snowstorm


Maine game warden Mike Bowditch has been sent into exile,
transferred by his superiors to a remote outpost on the Canadian
border. When a blizzard descends on the coast, Bowditch is
called to the rustic cabin of a terrified couple. A raving and halffrozen
man has appeared at their door, claiming his friend is lost
in the storm. But what starts as a rescue mission in the wilderness
soon becomes a baffling murder investigation. The dead man is a
notorious drug dealer, and state police detectives suspect it was
his own friend who killed him. Bowditch isn't so sure, but his
vow not to interfere in the case is tested when he finds himself
powerfully attracted to a beautiful woman with a dark past and
a troubled young son. The boy seems to know something about
what really happened in the blizzard, but he is keeping his secrets
locked in a cryptic notebook, and Mike fears for the safety of the
strange child. Meanwhile, an anonymous tormentor has decided
to make the new warden's life a living hell. Alone and outgunned,
Bowditch turns for assistance to his old friend, the legendary
bush pilot Charley Stevens. But in this snowbound landscape—
where smugglers wage blood feuds by night—help seems very
far away indeed. If Bowditch is going to catch a killer, he must
survive on his own wits and discover strength he never knew he
possessed.

A native of Maine, bestselling author PAUL DOIRON attended Yale University, where he graduated with a degree in English. The Poacher’s Son, the first book in the Mike Bowditch series, won the Barry award, the Strand award for best first novel, and has been nominated for the Edgar, Anthony, and Macavity awards in the same category. He is a Registered Maine Guide specializing in fly fishing and lives on a trout stream in coastal Maine with his wife, Kristen Lindquist.
“Bad Little Falls is a jewel of a book. Doiron has gotten it all magnificently right: a hell of a good mystery, beautifully drawn landscape and characters so evocatively written they follow you off the page. Buy this. The guy can write.” —Nevada Barr, New York Times bestselling author of Rope